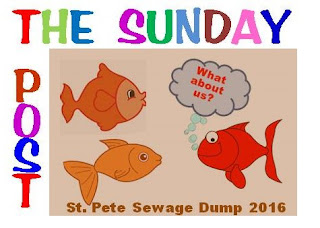 If you're a visiting tourist do your swimming at the pool, and you might want to steer clear of the local shellfish for a while.

If you have been following the local news lately, you are probably keenly aware of the amount of crap dumped into Tampa Bay most notably by the City of St. Petersburg.

If you want more information just go to the Tampa Bay Times website and put "sewage" in the search box and read on.

If you buy the argument, they do not know how much I have a large bridge just south of St. Pete, I would like to sell you.

Kriseman and his team have always had a transparency problem when it comes to bad news.

Weak arguments about the "quality" of the sewage running across 22nd Avenue North are just plain stupid.

Kriseman says the water is safe to swim in how about his honor and the Chief of staff put on some bathing suits and go for a swim at Lassing Park. A real head in the water not just wading around.

Kriseman says he believes his scientists. I suspect that's true, as long as they tell him what he wants to hear.

If you're a visiting tourist do your swimming in the pool, and you might want to steer clear of the local shellfish for a while.

The makeup of this task force should be interesting.

My bet is it will be populated with a group of choice elected officials, including most of the familiar faces we have seen on these task forces, who, by the way, are the ones, who should have been working with this problem all along.

Ken Welch would be a likely chair.

These task forces rarely accomplish much other than delaying the fix.

Look for studies, consultants, engineering contracts, more consultants, reams of reports nobody understands and some fascinating turf wars between jurisdictions along with a lot of wasted time and money.

Should we get another storm, more flooding and sewage dumping, the meetings will be a finger-pointing episode that rivals the Keystone Cops.

If you live out along 22nd Avenue North in St. Pete, you might want to get your own water test kit so when there is another flood of water running down your street from the Northwest Treatment plant you can get the real story about what is in that water.

You can find them on Amazon.