What's next for the Midtown Shopping Center? 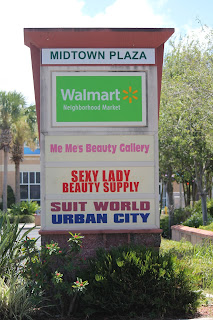 Mayor Kriseman and his dream team are quick to promote success on their shiny web site but slow to acknowledge problems.


Another well-intentioned effort by the City of St. Petersburg has come to a dismal end. Tangerine Plaza in South St. Pete will be sold in a foreclosure process later this week.

Here is some background from the Tampa Bay Times:

Everyone knew the Tangerine Plaza was a risky gamble. Time and poor management finally caught up with the troubled shopping center.

The decision by the City to attempt to buy out the foreclosure is a good one.

The timing and handling of the foreclosure and the City funding of the buyout are troubling.

Over and over City Council has complained about the Kriseman administration's tendency to bring issues like this to the City Council in panic mode. Council members Steve Kornell, Jim Kennedy and Karl Nurse questioned why the administration did not notify the council sooner about a problem that arose last year.

The City staff excuse regarding the foreclosure process is lame at best. When a major piece of the south side puzzle gets in any trouble City Council should be the first to know.

Mayor Kriseman and his dream team are quick to promote success on their shiny web site but slow to acknowledge problems.

Is there anything that could have been done? Hard to say at this point, but the unpleasantness and stigma of the foreclosure process might have been avoided by some early intervention by City Council.

Larry Newsome was the principal in the Tangerine Plaza and also the recently failed Sylvia's Restaurant in South St. Pete where the City had a major financial interest in the property.

Newsome's bad luck and timing are unfortunate, but I thought questions about the City's commitment to African American owned businesses were a little off base.

The real question here is how can the Kriseman administration do a better job at keeping the elected officials, and the public informed about what is going on?

Or maybe the real question is do they want to?

It would seem that the City Council can no longer rely on Mayor Kriseman and the City staff to tell all the story.

Staff seems to be muzzled by the Mayor's office.

All of this does not bode well as the City looks at bringing Pier Park and the Pier approach on line where significant problems are likely to occur.

City Council needs to develop a reporting process from internal staff like Property Management and from the Pier Project managers that ensure they are getting all the facts about significant city projects and investments.

Kriseman and his team simply cannot be trusted.