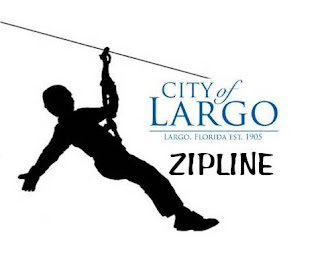 Who knew that the City of Largo was pursuing a "tree adventure", more commonly known as a zip line, in a park and recreational complex that backs up to residential homes?

Apparently the neighboring residents who use the park did not know.

A community meeting was held on Monday, August 15th at the Largo City Hall about the proposed zip line/tree adventure proposed at the Highland Recreation Complex. The Eye was there, and so was a packed room full of residents who live near Highland park and had strong opposition to the proposal that is literally almost in their backyard.

Daryl Works, in the blue shirt speaking in the video below, brought his own picture board armed with information and concerns for why he and his fellow neighbors oppose this proposal. Works thinks there are alternative locations better suited for this type of venture by the city. A direct link to the Youtube video is here.

It appears that those who would be most impacted by the "tree adventure" proposal were not made aware when this project started over two years ago.

According to the Minutes of the May 13, 2014 City of Largo Commission Work Session

As part of the recreational offerings at Highland Recreation Complex, staff have researched the viability and revenue potential of a tree adventure course. A tree adventure course is a collection of aerial games and zip lines in the canopy of a forest where participants face varying challenges.

There were some questions raised by the commissioners at that meeting about noise and the impact on parking and neighboring homes but no question was raised whether the idea or proposal had ever been brought up with the residents most impacted. The commissioners reached a consensus at that May 2014 meeting to support city of Largo staff soliciting proposals for a tree adventure course at Highland Recreation Complex.

According to the city of Largo's Parks and Recreation website, there are numerous parks and nature preserves in Largo.

Why did staff recommend Highland for this "tree adventure" course? According to the Commission Work Session minutes, the county had already been engaging with vendors and took some vendors there who "liked Highland Complex's central location and visibility."

Didi the vendors drive the decision for the location? Were any other locations seriously considered?

An RFP was solicited by the city of Largo and TreeUmph was selected as the vendor for the proposed zip line tree adventure project at Highland park. It appears that it was after a vendor was already selected that the city finally made the effort to inform the neighboring residents about the project.

Residents told us that some small signs were placed this past June (two years after this effort started) to notify the residents of a community meeting about a "tree adventure" - no mention of the "zip line". Only three people showed up at that meeting.

The residents felt that meeting was not properly noticed and it was very late in the process to finally be engaging those most impacted. There was never any notice placed at the park itself about the zip line/tree adventure proposal. The notice about the June community meeting was never posted at the park complex.

Many of the community residents did not know what a "tree adventure" was but they would have understood "zip line" if that term had been used on the meeting notice signs.

Needless to say, the neighboring residents most impacted are not happy and they oppose this project. Once many of them understood what this project actually was, they started organizing with their neighbors who showed up in droves to voice their opposition at the August 2nd city of Largo commission meeting. An ordinance authorizing leasing the city property at Highland Recreation Complex for a tree adventure course was on the commission agenda.

Go to 42:15 of the video recording of the August 2nd meeting to hear the discussion and public comment.

A motion was made to deny the ordinance but it failed 2-5.

Further discussion by the commissioners requested city staff reach back out to the neighboring residents regarding the proposed design. Motion to bring the zip line/tree adventure ordinance back to the September 6, 2016 commission meeting passed 6-1.

City staff brought renderings to Monday's meeting, "Rendering A" for the original zip line/tree adventure plan and a slightly modified version "Rendering B". Version B moved the end of the zip line a bit further away from some residences backyards.

City staff emphasized at the beginning of the meeting they were there to get input on which version (A or B) at Highland the community preferred not whether the zip line/tree adventure should be there or be somewhere else.

City staff attempted to use the infamous "put your dot on the plan you prefer" consensus building technique. However, the consensus from those attending this community meeting appeared to be "Neither".
The opposition in the neighboring community has done their homework, perhaps much more than the city of Largo staff.

Information they have found include:

Why didn't the city of Largo seek out public input when the process began on this tree adventure venture?

Some opponents believe Largo Central Park or the Nature Preserve that have a bigger footprint away from residential would be better suited for a zip line/tree adventure.

All the money received from this venture will go into the general fund for use anywhere.

The Largo city commissioners will vote on September 6th whether to approve the "tree adventure" zip line at Highland park. It is expected the opponents will show up again to voice their concerns.

The project has generated ill will from those who live nearby who felt there was not proper public outreach from those impacted the most.

The Largo commissioners will have to decide whether it is worth approving the now tainted project.

And fair warning if a proposed zip line disguised as a "tree adventure" comes your way.

Neighbors draw the zip…line on proposed project at park