The Beerification of bar food 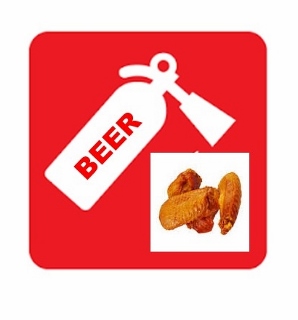 Today it is all about beer. Bars make a lot of money on beer, so they want you to drink as much as possible.

St. Petersburg, Fl
Opinion by: E. Eugene Webb PhD
Author: In Search of Robin
I used to really like bar food. It was great to head to one of the local chicken wing joints order up twenty or so with a big pile of fries and have a feast.

In those days, you could actually taste the chicken in a chicken wing and the potato in a French fry. Then food and flavor were the goal.

Today, it is not just the chicken wings everything in many of my former favorite watering/dining holes has been beerificated.

Today it is all about beer. Bars make a lot of money on beer, so they want you to drink as much as possible.

To accomplish the maximum beer consumption goal, wings, hamburgers, French fries and just about everything else is slathered in hot sauce and/or loaded cyan pepper and other thirst creating spices.

Time was you could order wings mild or medium, and they were actually good. These days even the mild ones are hot enough to eat the lining out of a healthy esophagus or stomach.

In my most recent and probably last visit to one of my all-time favorite wing establishments, I ordered my wings medium with the sauce on the side. These days to thwart people like me; they put hot pepper in the breading so you’re still gasping for something to drink.

I cut the “medium” sauce 50/50 with ranch dressing, and it still tasted like crap.

Fries are the same salted with salt and what I assume cyan pepper. Yuk.

Note to restaurateurs: If you buy your cyan pepper in 100-pound  bags, you probably have the answer to those empty tables at traditional dining times.

Don’t get me wrong I like beer. How can you go wrong with something made by throwing some wheat, barley or some other grain along with some hops into a big kettle bringing it to a boil then toss in some yeast and letting the whole mess rot for a while?

Pump it through a cold filter and add some carbonation, or if you are into real beer, put in a wood keg and let it carbonate naturally.

If you want craft beer, add some crazy flavors (they call that infusion for you non craft beer aficionados),  and you have craft beer. Cheap to make profitable at the bar, and if the food is hot enough you will drink it by the gallon.

I had dinner with my wife a few weeks ago at one of the finer dining establishments in Indian Rocks Beach and the “featured craft beer” was $24 a glass. There is nothing crafty about that. It is just plain highway robbery.

You up for that?

When I want a beer, it is because I want a beer, not because some wackjob in the kitchen had to wear safety gloves to handle the breading mix or drowned my chicken wings in 4 alarm hot sauce.

For now, I am abandoning the “traditional” wing houses.

If you know of a place where mild is mild, medium is medium and hot can still be consumed without needing a pint of beer per wing post it below. I will become a regular and consume a beer every now and then.