From Eye on Tampa Bay 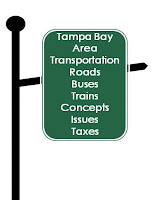 By Sharon Calvert
It's been one week since the county commission voted NO to putting another sales tax hike boondoggle on the ballot. The local media, however, insists on continuing to insert themselves into our transportation by creating news stories, confirming once again that "they" are part of the problem.

In a meeting with the Tampa Bay Times editorial board, Woodard said he's already had conversations about it with his counterpart in Hillsborough, county administrator Mike Merrill (emphasis mine).

The idea is the two county governments would ask their respective voters in the same election year to approve a half cent sales tax increase that would finance a transportation plan that improves services and infrastructure locally and also spans Tampa Bay, finally linking Hillsborough and Pinellas counties.

That kind of campaign, Woodard said, could finally lead to a breakthrough.

Woodard is the husband of former Tampa Mayor Pam Iorio. He got the job permanently in August 2014. It was Iorio who wanted high cost rail projects and used the last year of her mayoral bully pulpit in 2010 pushing hard for the failed rail referendum in Hillsborough County.

Merrill has been stepping way outside and over the bounds of his authority the last two years. Like former Mayor Pam Iorio, Merrill's been running around the county pushing another huge sales tax hike referendum as if he is an unelected county mayor. Referendums are elections and elections are political activity.

The electeds must reign in the unelected bureaucrats scheming for a two-headed sales tax hike in Hillsborough and Pinellas. Stop focusing on sales tax hikes for boondoggles. In Hillsborough start funding our roads and transportation needs NOW within our growing revenues in our ballooning budget. Start acting like everyone else must - fund our highest priorities first within our existing budget.
The electeds must remember that Hillsborough's CIT tax and the Penny for Pinellas tax are coming up for reauthorization. Those taxes must be taken into consideration and the reality that today's electorate is not happy with the status quo.

The Times also reported in their article that Brad Miller, CEO of PSTA and Katherine Eagan, CEO of HART were open to merging their transit agencies. Bigger government agencies do not equate to better, more cost-effective or efficient agencies. Two state funded studies requested by merger supporter Senator Latvala about a PSTA-HART merger confirmed that. Bigger government agencies further distanced from the taxpayer often increases the influence of special interests while reducing the influence of the local taxpayer.

“I’m a little frustrated with our friends in Hillsborough,” Commissioner John Morroni said. “Not to give the people a chance to vote on it was really bad in my opinion.”

Where was Morroni in 2010?  The people of Hillsborough did vote in 2010 and overwhelmingly said NO like Pinellas did in 2014. Morroni voted to put the Greenlight Pinellas boondoggle on the 2014 ballot that went down in flames. Why does he think Hillsborough County commissioners should trust his judgment?

Our electeds must respect the will of the voters and stop throwing sales tax hike referendums at us over and over and over. The old sales tax referendum template of try try try again is broken.

Commissioner Janet Long said there are multiple government agencies across the Tampa Bay area working independently of each other to provide transportation solutions. She estimated that there are more than 100 officials and citizens serving on various committees or in various agencies. Those need to be consolidated, she said.

Commissioner Karen Seel pointed to the formation in 2014 of the Tampa Bay Transportation Management Area. It was formed by the metropolitan planning organizations of Pinellas, Hillsborough and Pasco. The TMA recognizes the fact that the transportation systems of three-county area are closely linked.

The history of transportation in Tampa Bay appears to be when someone(s) does not like what a current agency, commission or committee is doing or they cannot get their agenda through, they simply create a new agency. Of course none ever go away and now we have this convoluted mishmash of unnecessary overlapping organizations. That's how we got the TMA Leadership Group in 2014 - why not just add another group to the other 12 organizations that already deal with transportation in Tampa Bay.

All these organizations become taxpayer funded venues for all kinds of dog and pony shows and much of it flies under the radar of the public.

Their April meeting included a presentation from a transit advocacy organization on transit referendums. Hmmm…