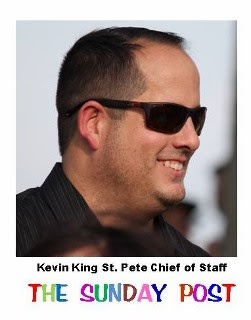 The Kriseman/King relationship has been a long and somewhat curious one dating back to Kriseman's time in the State Legislature.

Kevin King, Rick Kriseman's chief of staff, continues to be a bit of a lightening rod. His recent comments regarding the City of Oldsmar's overtures to the Rays regarding a new stadium site have created a bit of a dustup.

Kings' comments as reported in a Charlie Frago Tampa Bay Times article Could hunt for stadium lead Tampa Bay Rays to ... Oldsmar?: "Kevin King, chief of staff for St. Petersburg Mayor Rick Kriseman, dismissed the idea as failing to meet the Rays' stated criteria for a new stadium. Oldsmar, he said, "won't have the "arrive-early, stay-late" appeal of an urban center.

"If the Rays want to alienate St. Petersburg and Tampa, it may be ideal," King said. "To me, Oldsmar's like Georgia."

King's Comments seem to have irritated everyone from the Mayor of Oldsmar Doug Bevis to Oldsmar City Council member Jerry Beverland, and a couple of members of the Pinellas County Commission.

The role of Kriseman's chief of staff Kevin King in the recent political squabbles with the County Commission and State Sen. Jack Latvala also annoyed Long.

The Kriseman/King relationship has been a long and somewhat curious one dating back to Kriseman's time in the State Legislature. King was a political behind-the-scenes operative in the Kriseman campaign for Mayor and was repaid handsomely by Kriseman with the six-figure chief of staff job.

Which by the way, he has yet to execute properly.

All part of Kriseman's expensive office of the Mayor.

In my conversations with Kriseman during the Mayoral campaign regarding King, he was always defensive of King and highly complementary.

My first encounter with King after Kriseman's election did not go all that well, Bay Post Internet A Not So Casual Conversation with Kevin King.

King is camera shy, has a very short temper, is easily provoked and often talks before thinking. He is neither liked nor trusted by City staff.

As far as baseball goes the Rays have enough loud-mouthed egos on the field, I doubt they will be too receptive to one on the negotiating team.

Kriseman wants to keep King around, well fed, and watered until his reelection campaign but he needs to listen to the drumbeats from other elected officials and maybe ask a few questions.

King has never been an asset and his liability rating is rising quickly.