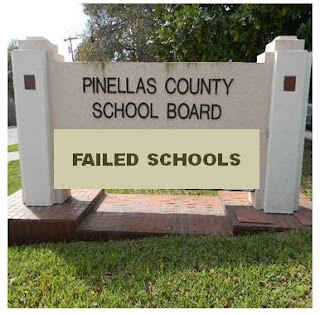 The problem is well defined those responsible are well known. Will anyone be held accountable?

With the investigations, closing in on all sides, the Pinellas County School District is in a mad scramble to get programs into place that look as if they are addressing the problems of the district's failing schools.

The real question here is will anyone ever be held accountable for what happened to the Pinellas County School system?

The answer is probably no!

None of this is an accident.

Elected Pinellas County School Board members defined in the Tampa Bay Times article's Failure Factories made conscious decisions that denied resources, opportunities and security to these predominantly black schools while making sure similar conditions did not exist elsewhere in the school system.

There is a term for that it is discrimination based on race, it is illegal, and it is a crime. I for one think those who perpetrated this crime on our community should be held accountable.

The agencies currently "investigating" this debacle have little or no prosecutorial power and so far no law enforcement agency or the State's Attorney General has indicated any interest in pursuing those who caused this situation to happen.

In general, the investigating agencies only authority is to deny funding, the very thing needed.

Attempts to create or reopen cases that might ultimately lead to holding the School Board and possibly individuals accountable will continue to be delayed and stonewalled.

The mad scramble by the District administration to raise teacher pay, hire a "turn around leader" and what will likely be a highly paid and relatively ineffective staff is an effort to put a warm blanket over the ugly fact that the people we elected to past and present school boards don't love, like and respect these kids as much as they do the rest of the kids in the school system.

Oh, they will bawl and whine and bleat "No it is not true; we do love and care for them." Unfortunately, their votes tell a different story.

We can solve this problem at the ballot box by simply voting out every current member on School Board regardless of political affiliation and getting a new team that will actually do their job. That will take at least three election cycles and almost six years.

In the meantime, the District administration will plod along looking over its shoulder at a governing body that at best will provide resources grudgingly to start resolving the mess they created.

Maybe it is time for the Governor to step in, remove some or all the current School Board members, and hold a special election so Pinellas County can get a new start.

While we are at it, let's do whatever it takes to put term limits on school board members.