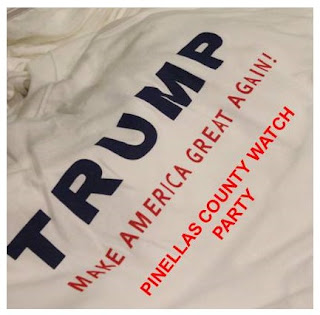 People attended from all over the County, there were even a few from Tampa.

The Republican Party of Pinellas County e-mailed an announcement for the Donald Trump South Carolina Primary Watch Party last week. The event was held in Pinellas Park at Quaker Steak and Lube on 49th Street.

Theresa and I decided to drop by. We arrived about 6:30 PM, and the organizers were already setting up. T-shirts, hats, yard signs and other Trump material were on display.

By 7:15 the large room at Quaker Steak and Lube was full with people standing around the perimeter. Most interesting was the demographic mix. While seniors were in the majority, there was an interesting group of millennials and those just of voting age.

No donations were requested or accepted.

You can see my entire post on the Trump Watch Party in my saintpetersblog Post Observations from the Pinellas County Donald Trump election watch party.