St. Petersburg has a sewage problem 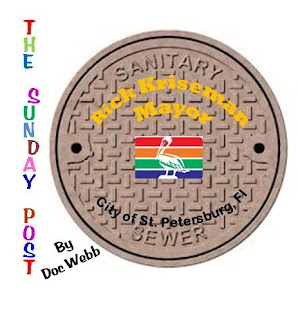 Maybe the manhole cover shown would provide some motivation for the Mayor to put some serious effort into the City's infrastructure.

There should be no doubt at this point that the City of St. Petersburg has a storm-water system problem. The infrastructure is old and in need of major repair.

All of these problems came to a head in the recent St. Pete sewage dumps into Clam Bayou in Gulfport and into Tampa Bay.

If you're not up on the issue, here are several links that will get you caught up.

"We would like to see the city do Infrastructure 101 to make sure the sewage system is in proper condition," said Walter Donnelly of the Alliance for Bayway Communities. "Six million dollars and $1 million going to sewers? Thank you for that. But bicycles, Mr. Mayor, when the city's sewers are falling apart? Please."

It seems the Mayor is more taken by things where he can hang his name, so I thought maybe the manhole cover shown above would provide some motivation for the Mayor and the dream team to put some serious effort into the City's infrastructure.

Given the Kriseman administration's fascination with the millennials, it might be worth considering that the first time they are ankle-deep in floating sewage their fascination with St. Pete might wane.

It's really hard to sit in an outside eatery and swill your favorite craft beer with crap floating down the street.