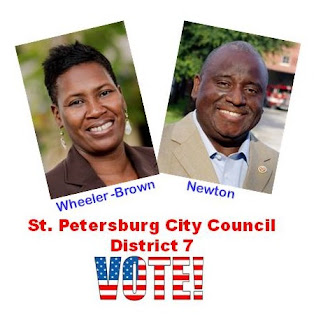 The Race for the St. Pete City Council Race has quickly turned into a political donnybrook.

St. Petersburg, Fl
Opinion by: E. Eugene Webb PhD
Coauthor of: So You Want Blog
In a blistering series of Posts in saintpetersblog, Janelle Irwin has pretty much dismembered the campaign of Lisa Wheeler-Brown:

The Tampa Bay Times continues to endorse Wheeler-Brown solely based on her stand to support the Mayor's Memorandum of Understanding (MOU) with the Rays.

Which brings me to my point.

The election in District 7 is about much more than just baseball. In fact, baseball should be the last thing on your mind when you cast your vote in this very important race.

If baseball plays any role in this election, it is whether or not baseball will finally get in line in its proper place behind, crime, rebuilding south St. Pete, failing schools, failing infrastructure and a misguided Kriseman administration.

The people who live in District 7 deserve a Council member, who has experience negotiating with public administrations, one that understands the political process, will represent them and not major league baseball and understands how important it is to follow the rules – all the rules.

If the Tampa Bay Rays paid their tab, packed their bags and left town tomorrow St. Petersburg would not shrivel up and die. It's just a baseball team and if attendance figures are any indication one that not a lot of people in St. Pete really care that much about.

Major league baseball likes to tout their franchises as the reason's communities grow and business relocates. It hasn't worked here and it won't work here regardless of a new shiny and very expensive stadium that sucks up a lot of taxpayer dollars.

There is nothing wrong with letting the Rays look around the Bay area for a new site. Nevertheless, let's get an Agreement that works for and protects the interests of the people who built the Trop.

Everyone in St. Pete has an obligation to make sure the people in District 7 get a Council member who represents their interests and the City's needs.

Go to the web sites:

Read the information, follow the newspapers and social media and above all else make an informed decision and be sure to vote in this very important race.

If you don't already have it, your mail in ballot will be showing up soon. Be sure to fill it out, sign the Ballot and mail it back.