Kriseman in a bind on Rays – deal or no deal? 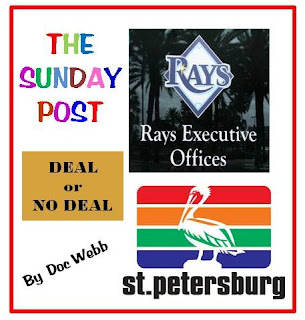 Who will Kriseman really be negotiating for when he meets with the Rays St. Petersburg or his ego?

St. Petersburg, FL
Opinion by: E. Eugene Webb, PhD
Coauthor of: So You Want to Blog

In a not too surprising turn of events, St. Pete City Council approved the Kennedy Plan allowing the Rays to look for a new stadium outside the City.

Charlie Frago Tampa Bay Times has the details in his article St. Petersburg approves proposal that allows the Rays to consider stadium sites outside the city.

You would think just getting the controlling political body to agree to let the Rays look would be a victory, but Kriseman started to poo poo the deal from the get-go.

"Typically, you don't see offers get better with time. So that's a concern. The other concern is that the amount that the Rays are being asked to pay is more than they were asked to pay the first time," Kriseman said after the vote.

Actually, deals do get better with time, especially when the other party, the Rays, have a bit of a time crunch themselves.

Add to that Kevin King, Kriseman's Chief of staff comment regarding the Mayor's view: "He'll attend the meeting, but whatever happens, he won't be reduced to playing messenger.  He doesn't have to do anything," King said. "He has to be on board, too."

Council member Charlie Gerdes plan, which I personally liked, never got a hearing, so he voted against the Kennedy deal. Don't read too much into the Gerdes vote. This way, City Council has a fallback position if they need it.

The chances the Rays can get out of the Trop by 2020 are small so the likelihood they would pay out the whole $33 million of the Kennedy plan is also small. Even if they did and if their bright shiny new stadium was full of beaming fans wouldn't it be worth it?

They wouldn't blink at $33 million for a player they wanted.

What we have now is a Mayor with a wounded ego, a chief of staff who can't seem to keep his mouth shut, a City Council Chair that switched sides and a baseball team that has a tough decision to make.

The Rays would be smart to grab this deal and get the process they have longed for locked in and started.
Trying to play Gerdes against Kennedy would be a big mistake and trying to play the Mayor against City Council would be really stupid.