Trump and the media - who is winning the War?

I like Trump's position on the press. They have to think before THEY act or ask, and that is a refreshing change. 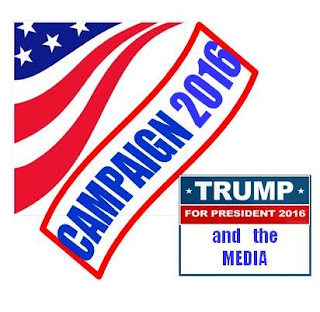 One of the most fascinating parts of the Trump Campaign is watching the media twist in the wind.

Among the most frustrated is NBC's Chuck Todd. Todd has been licking his lips for a shot at Trump and he got it two Sundays ago. Todd, who can't begin to carry the water of his predecessors on Meet The Press, often comes off like a spoiled brat. It was hard to tell who was yelling the most for the attention Todd or Trump.

Results were Trump got the air time, and he really didn't fair that badly.

Trump won't let the battle with Fox News go quietly, and in so doing, he has made FOX news and its management look like the less than stellar news organization they are.

Fox News Roger Ailes' quote, "Megyn Kelly represents the very best of American journalism and all of us at FOX News Channel reject the crude and irresponsible attempts to suggest otherwise," should be enough to make a real news person cringe.

CBS and its flagship Face the Nation Sunday show has so far simply reported Trump and stayed above the fray. You can tell at times it is difficult for the CBS air staff to contain themselves.

ABC, which has some skin in the game, has taken up Univision's Jorge Ramos cause; he was the reporter who Trump had removed from a press conference. If you watched the exchange, Mr. Ramos appeared to be more pushing for a reaction than an answer, and he got it.

Trump is the first candidate in a long time to treat the press as less than all empowered and has not been reluctant to call them out when they do things that other candidates simply shrink away from fearing the press will retaliate.

I like Trump's position on the press. They have to think before THEY act or ask, and that is a refreshing change.

The thing that continues to amaze me is how the press has been so easily taken in by Trump. If they could just bring themselves to walk away, report the news and leave the Donald to himself; he might  tire of the whole presidential thing.

For now, the press is fueling and funding the Trump campaign by never-ending coverage, and the long-shot possibility that they might be the one that bags the Donald. Trump is paying them back with unbelievable ratings so maybe it is a fair deal.

The other key issue is Trump really does not care what anybody in the media and especially the talking news heads or their management thinks.

Trump may be one of the very first high profile candidates to figure out that most of the people at home see broadcast journalism as only another TV reality show with a sometimes attractive host. Since all the networks cover the same stories, just how much original thinking is there?

Answer: not much since ego replaced intelligence at the anchor desk.

Donald's hacking up of the high profile media has struck a chord with the public. There is a real message here, but my bet is the people who run the network news operations are too busy trying to figure out how to get Trump to hear the real message.

Network news needs to clean up its act and its approach.