When was the last time you heard waste water or storm water disposal as a major issue from the Kriseman administration? 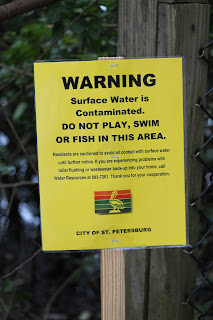 The project required massive underground construction and expansion of the Southwest treatment facility.

The decision to close the Albert Whitted Plant was promoted as a way to save "a couple of million dollars a year" in operating costs in a news release from the Chamber of Commerce: St. Petersburg's Waste Water Treatment Plant to Close.

A few lines later in this article the Chamber lays out the more probable reason for the closing: the "more than six acres of valuable down town waterfront property" that will become available. While the land at this point reverts back to the airport, look for subtle attempt to change that like the Downtown Waterfront Master plan.

This past week or so St. Petersburg pumped raw sewage into Clam Bayou which is right next to Gulfport and drains into Boca Ciega Bay near Gulfport's public beach for more see Mike Deeson's 10 News Investigates: St. Pete Dumpling Raw Sewage.

Granted all of this recent dumping of effluent was the result of an unprecedented weather event and one could argue a once in a long weather cycle event, but with climate change these "weather events" are becoming more the norm than the exception.

There is also the issue of all of the vertical growth being promoted in St. Petersburg. Each one of these multi-story developments puts added pressure on the fresh water system and the sanitary sewer system.

The real issue here is when was the last time you heard waste water or storm water disposal as a major issue from the Kriseman administration?

The City is now served by three wastewater treatment plants one of which, the Southwest plant, sits in a low flood prone area and would probably be totally swamped in a major hurricane.

These are multi million if not billion dollar problems affecting the quality of life that are let languish while the administration chases baseball, builds a park instead of a tourist attraction and grabs 20 million from the County to pretty up the "uplands" so somebody's buddy can have a nice place to put his restaurant.

Building sewers and waste water treatment plants isn't really all that exciting for politicians. The Kriseman administration doesn't seem to have these issues high on their radar screen. But they should.

If you live in St. Pete it would be nice to know that in the future when you flush your toilet you won't meet up with what you flushed a day or two later while you're fishing on the bay.