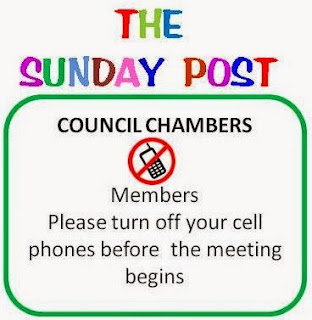 There is a lot going on in most City Council meetings that is important. I have frequently noticed council members tapping a way on their cell phones as deliberations go on, the public speaks, etc.

Here is a FACEBOOK thread from last week's Council meeting where the Pier was being discussed:

Amy Elizabeth Foster It's not disrespect-its frustration that he refuses to attend committee meetings where all our decisions are made and background is provided. He also doesn't read the backup material so we waste tons of your tax payer dollars b/c he isn't carrying his weight and it drags on meetings. It's also sad bc he makes points sometimes that should be listened to but people tune him out bc he starts with the same juvenile data no matter what the topic is. There I said it.
May 7 at 10:54am · Like · 9

City Council members are supposed to turn all posts and tweets into e-mails and save them for public records purposes. I am making a public records request for this one. I'll let you know if one shows up.

The point is this, while this one may be a bit questionable as to its appropriateness it also begs the question of people getting information from and/or supplying information to City council member's during meetings which is neither in the public view or available as a public record.

Kind of moves a social media cloud over the meetings in the sunshine concept.

I also find it exceedingly disrespectful as council members tweet and post away on their cell phones as members of the public, who often struggle with getting up and speaking, find themselves being technologically ignored.

All of this adds a great deal of credibility to the ongoing discussion regarding how much these elected officials really care about what the public thinks.

It is time for Council to agree to a cell phone free zone on the Dias, and for the Legal department to enforce the Tweet/Post to email requirement.

Since some of our council members are not good at dealing with temptation, perhaps a secure lock box where the phones can be placed would be a good idea.