The St. Pete City Professional Staff should consider a Union 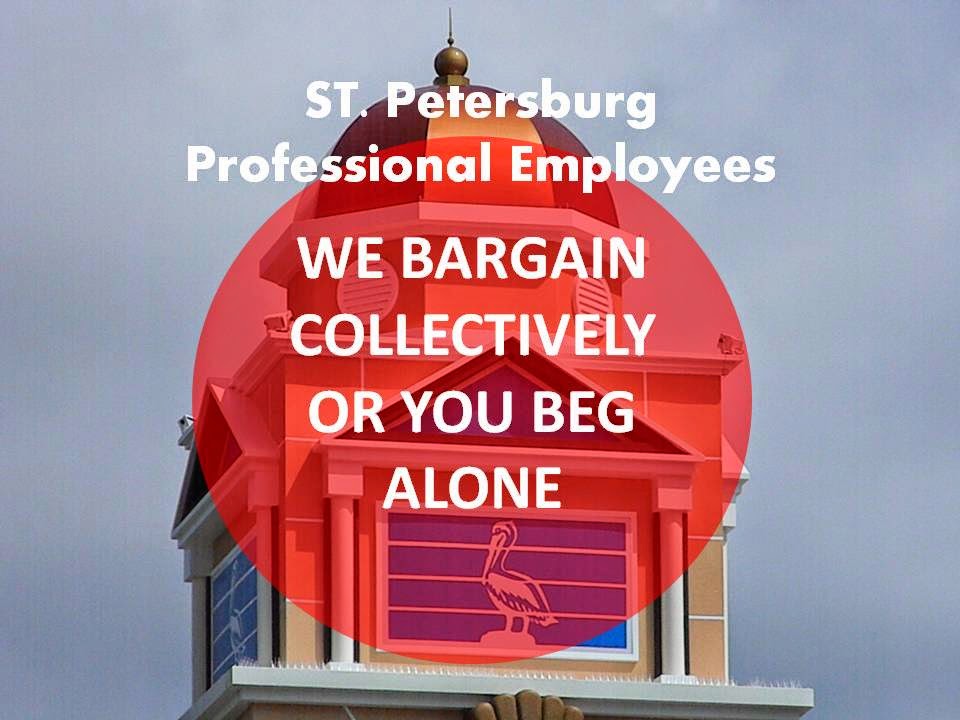 The City professional staff, those making up the engineering, programming, network, systems administrators, GIS professionals, desktop support personnel, water treatment professionals and a host of other City staff members that are classified as professionals have found themselves in a difficult place over the last few years when it comes to wages, benefits, working conditions and advancement.

In a Tampa Tribune article on July 24, St. Pete mayor against city workers’ unionization push, Christopher O'Donnell lays out the current status of the attempt by some members of the City's professional staff to establish a bargaining unit.

Quoting from the Tribune article, Paul Zimmerman an industrial pre-treatment operator said, "The group’s wish to join the union is not just about pay, but also to have a voice at the table when pensions, vacation policy and health insurance issues are discussed."

It is true that the professional staff is in a limbo area especially when it comes to wages. They were one of the early groups that went on the no raise list while several administrations tried to shuffle money to deal with revenue problems and find funds for the more "visible" programs. As a group, professional employees have no voice at the bargaining table and end up with some, all or none of whatever the other bargaining units can negotiate.

As an Assistant Director and Manager, I had very little lee way in determining compensation from new hires to seasoned staff members.

Professional wages and salaries have not kept pace with comparable private sector jobs and even some public sector employers. Recruiting high quality professional staff is becoming more and more difficult. Ultimately that affects the quality and reliability of City services delivered to the public.

In speaking of the Mayor's position in the Tribune article Ben Kirby, Kriseman Communications Director said, “He (the Mayor) enjoys having direct relationship with professional staff.” “It would remove the flexibility to compensate outstanding professionals — you couldn’t give them merit increases.”

What the Mayor didn't add is it is a heck of lot easier to fire you if we don't have all of those pesky Union rules to deal with. And by the way merit raises can be built into a well crafted Agreement.

So if you're a St. Pete Professional and you're still having difficulty in deciding whether or not to sign one of those cards or vote yes on a union, try this: Call the Mayor's office and ask for an appointment to talk about your last few raises and those "merit raises" the mayor wants to give you. Ask how much money is there in the budget for those raises for YOUR group.

Your chances of meeting with the Mayor alone are probably slim and none, you might be honored with a few meaningless minutes with Kevin King, he's the Mayors' Chief of staff, and most likely you and your boss will get a call from HR.

It's time for the City professional workers to organize. Your directors, assistant directors and managers have their hands tied when it comes to representing you and your interests. You need someone who can sit at the bargaining table and represent your special interests just like the rest of the City workers who go to work each day and do their job.

Being part of a bargaining unit does not affect your professional status one bit. You can't lose the professional relationship with the administration, simply because you do not have one.