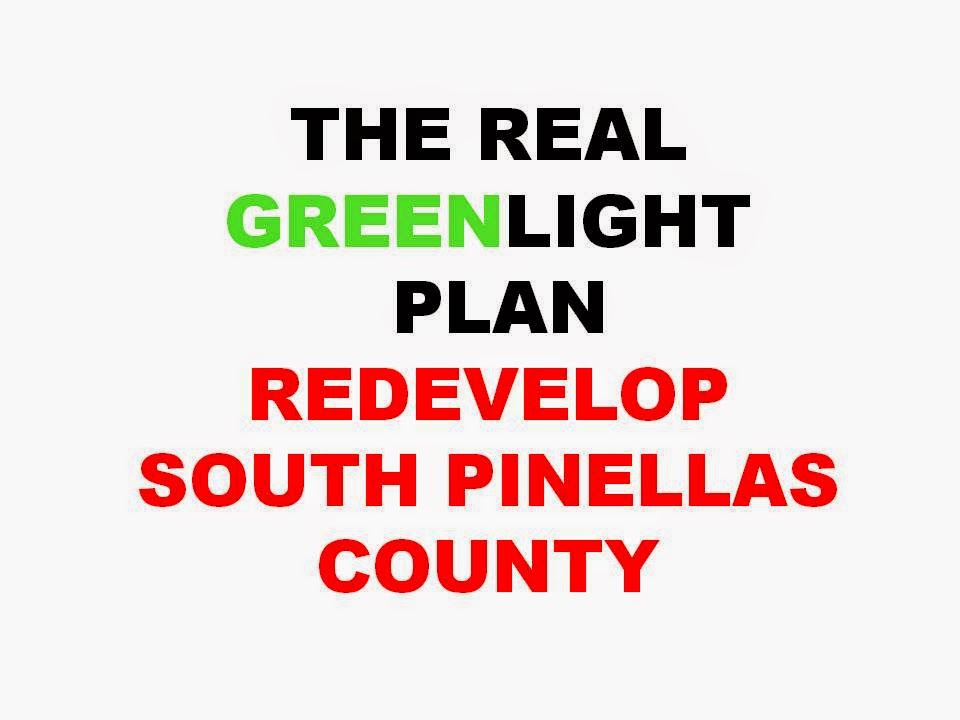 I could hardly believe my eyes last week when during Don Ewing's Greenlight Yes presentation at the North Pinellas County Regional Chamber of Commerce Forum when a slide popped up listing the three objectives of the Greenlight effort and one of them was REDEVELOPMENT.

While I had heard redevelopment mentioned, hinted at and even chuckled about; I had never seen it in a formal Greenlight presentation as one of the three primary objectives of the Greenlight light rail effort.

It was especially interesting as Ewing went on to point out that residential, commercial real-estate, business and commerce will all migrate toward the rail centers, given the fact that his audience lives, works and for the most part has no business interests anywhere near the proposed meandering light rail line.

Ewing went on to expand on how business will change as the community redevelops around the Greenlight plan. You could see the concern on the faces in the room.

Now you understand why the NATIONAL ASSOCIATION of Realtors kicked in $245,000 to support Green Light Yes, check my Post 245,000 Reasons to Vote NO on Green Light Pinellas.

Greenlight Pinellas went astray as it came into the clutches of TBARTA, and the big Real-estate developers.

It morphed from its original purpose, which was to provide public transportation for those who really need it, into a masterfully crafted redevelopment plan designed to funnel 100s of millions of tax
payer dollars into what people think is a transportation authority but what will ultimately become the biggest redevelopment agency in the County and mostly outside the control of the County Commission and the local municipalities.

How could that paragraph above be true?

Take a look at my Post Greenlight Pinellas Surtax Interlocal Agreements. Note what is not covered in the Milestones: BONDING, the issuing of obligation bonds, essentially loans, to finance the light rail redevelopment plan.

One way to craft the light rail program and its redevelopment objectives is through a series of carefully constructed obligation bond issues with highly restrictive bond covenants detailing how the money must be spent.

Once issued, the money (sales tax revenue) pledged to these bonds is no longer available and cannot be reduced, and the covenants within the bonds are essentially unchangeable and outside the purview of any political body.

With permission in both the Ordinance No 13 34, voters are being asked to approve, and the PSTA/County Interlocal Agreement to renew these bonds over and over, both light rail and the redevelopment of Pinellas County become a self fulfilling prophecy.

Not possible you say.

Then why are organizations like the National Association of Realtors, major financial institutions, builders and lawyers lining up and opening their wallets in such a big way to support this tax referendum?

I would offer it is much more opportunistic than altruistic.