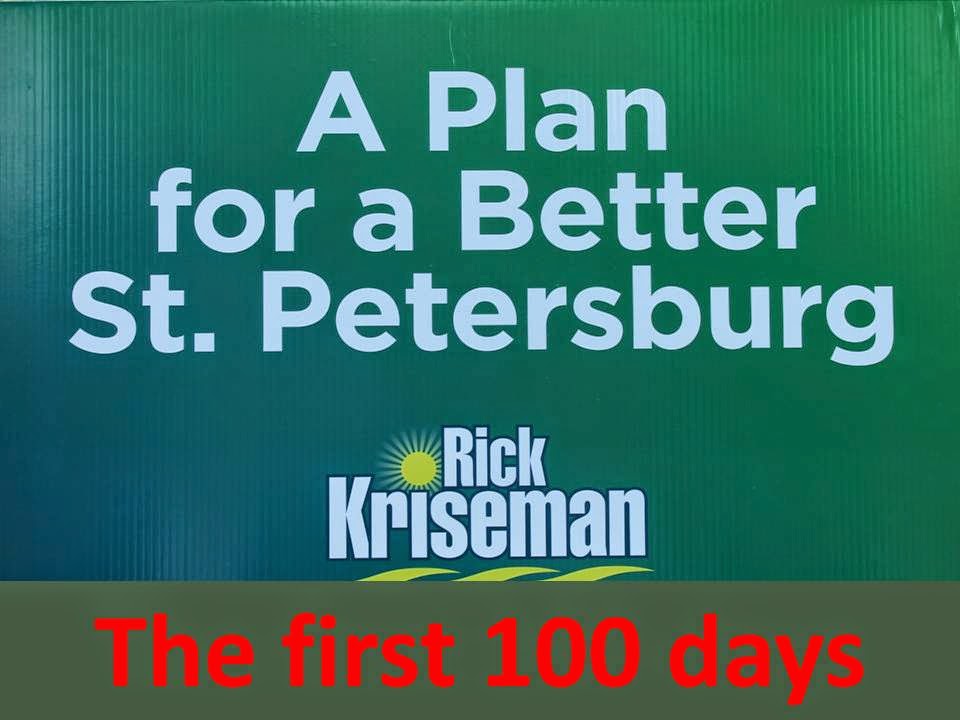 People seem to make a lot of new Mayors first 100 days.  The Kriseman administration has put forth a bewildering series of statements detailing the Mayor's first 100 days in office. You can see a Video of the New Vision at New Vision Values and Strategic Pathways.

There is not a lot written about the first 100 days of the Baker Administration. The primary reason being; we were all too busy trying to keep up with the new Mayor and what he wanted done - NOW.

Case in point in my post A Casual Conversation with St. Petersburg Deputy Mayor Kanika Tomalin the new Deputy Mayor touched very lightly on what will soon become a major issue when she said, "I think the most significant thing we can accomplish is aligning resources with our priorities in a way that sustains beyond our time here. We have a Budget that isn't necessarily completely aligned with where the City would like to go." It's all about the value proposition in my mind," Dr Tomalin continued. "And it translating the work we're doing in the realignment of the Budget, in a way the community understands how their investment is best serving them."

Translation: We are going to move some money around to make all of this happen. Somebody's ox is going to get gored.

If you read through the links, watch the video, and read the 100 day accomplishments they look pretty impressive and to some degree they are, but a lot of the things on those long lists are just the City staff doing
their normal jobs on a daily basis and a great deal of that would happen no matter who is mayor.

What is impressive is the Vision as Dr. Tomalin articulated in our conversation, "My biggest objective for the first 100 days is mostly accomplished and that was helping the Mayor articulate his Vision of an over arching goal for all of the team members of the City. We have created a planning model by which we will all work and the matriculation toward that Vision over the course of our work for the City and I am glad that it is done and just about ready to be introduced to the community."

The thing missed in the Mayors 100 day extravaganza, and probably the most significant, is Kriseman's major scores getting Mike Dove and Todd Yost to return to the staff and the placement of Dave Metz in a pivotal role in the administration.

1. As indicated above the Mayor needs to find funding for his new Vision. Where will it come from?

2. Hitching up a thoroughbred team like Yost, Dove, Metz, and Tomalin is no small feat, but the real challenge is supporting these people when they start to run so they can make the Vision happen. Is the new Mayor really up to it?

3: Granted the development of a Vision and mission was time consuming and deeply needed, since there was no vision in the Foster Administration, but the Mayor is on the fence on a couple of issues he could easily wipe off the table right now. Red light cameras for instance could be shut down tomorrow, but the Mayor keeps hanging on hoping for who knows what. Programming like food trucks could be immediately added to the Pier.

4. Then there is the matter of the new almost million dollar office of the Mayor. So far the head and shoulders stand out is the new deputy mayor, but pretty soon City staff and the public are going to start wanting to see some output from the rest of the high dollar crowd. Are they up to it for the long haul or just holding down seats until the next election?

5 And finally when the Beach Drive Boys come balling, and the Chamber comes crying, and the Arts community comes with stars in their eyes, and the homeless advocates come with tears in their eyes, and the Police Union and the Fire union and the SEIU make their demands can the Vision stand the test and is the new high powered highly paid office of the Mayor ready to make the tough decisions or will the Vision become just another seldom clicked on link?