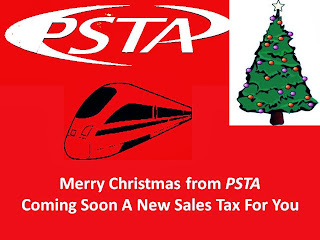 It looks to be a Merry Christmas at the Pinellas Suncoast Transit Authority.


The Pinellas County Commission gave them the Greenlight Transportation sales tax ballot language they wanted and removed the only seriously dissenting voice Norm Roche from the PSTA Board.


If someone would just put a really big train set under the PSTA tree it would be a perfect holiday.


An indication of just how political the transportation sales tax referendum will be is indicated by Norm Roche's removal from the PSTA board. No dissenting voices welcome at PSTA only smiling heads nodding yes.


Granted Mr. Roche did himself no favors by missing meetings and providing the ultimate excuse to boot him off the board.


It looks like the incoming chair would like to put a little distance between the Sales Tax controversy and the County Commission by eliminating any serious dissent coming from commissioners who are PSTA board members.


It seems almost every politician in Pinellas County is on board with the transportation sales tax increase which supports a plan I dare say few of them have actually read.


Another great Christmas present for PSTA.


The big question is what will happen in the New Year when all of these lemmings like politicians start to realize that some of this $130 million per year is coming from their jurisdiction and the property tax off set is a shell game.


Businesses make relocation decisions based on a lot of things and taxes are right near the top of the list. How many jobs might this tax increase actually end up costing?


At some point, probably when some of these fine public servants begin to recognize they may get voted out of office for supporting this boondoggle, they will start to jump off the train.


It's just a matter of time. I wonder who will be first.


Get ready to vote "NO" on the Transportation sales tax referendum.