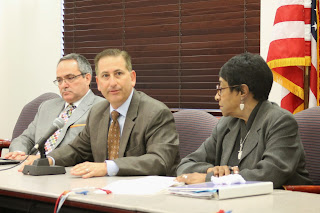 
The efforts of the Co-Chairs are part of an internal planning process which will produce data and observations about existing conditions of St. Petersburg's governing structure. They have confirmed the availability of a number of talented citizens, from which the Mayor-Elect will then expeditiously receive and assess recommendations presented to him in the appropriate public forum and with full transparency, as required by Sunshine mandates.


The efforts also include working to refine the Information Base being created to inform Mayor-Elect Rick Kriseman's consideration of the human and policy resources which are available to him as he builds a proposed agenda for the Transition Team's initial examination and comment.


Michael J. Babboni, Esq.
Is a partner at Shapiro, Goldman, Babboni & Walsh. He was a charter member of the St Petersburg Nuisance Abatement Commission and is a registered Player Representative by the NFL in Pinellas County.


Johnny J. Bardine, Esq.
Is a practicing attorney and member of the Pier Advisory Task Force. He has worked for the Magistrate's Court in Camberwell Green, London, United Kingdom and after Law School a law clerk in Prague, Czech Republic.


Terry Bryant
Is a long term resident of St Petersburg that is active in various community organizations.


Louis Brown III, Esq.
Is a member of the Florida Bar and currently the Assistant Director ofLegal Affairs for Minor League Baseball. In the community he serves as the President of St. Pete Together, and Co-Chair of Agenda 2010 & Beyond.


Michael J. Connors, P.E.
Is Administrator for Public Works with the City of St Petersburg and the City’s Sustainability Officer.


Leslie Curran
Is owner of Interior Motives and has been active in cultural affairs for the City for many years. She is currently a member of the St Petersburg City Council, representing District 4, that will step down January 1, 2014 due to term limits.


Bob Devon Jones
Is Artistic Director and Co-Founder of Studio 620 in St. Petersburg. He has been a resident of St. Petersburg since 1997, participating in many educational and cultural organizations.


Mike Dove
Served the City of St. Petersburg for over 26 years in various positions culminating in Deputy Mayor for Neighborhood Services. Mike is currently a member of St Petersburg Neighborhood Home Solutions, a non-profit that focuses on affordable housing.


Winnie Foster
Is CEO of the Sojourner Truth Center and a community activist who has lived in St. Petersburg for more than 40 years. She has served on countless boards and committees and been a champion for civil rights and the environment, among other issues.


Gypsy Gallardo
Is lead designer of the 2020 Plan to reduce poverty by 30% in South St. Petersburg by the 2020 Census, and Publisher of the Power Broker magazine, the most widely circulated magazine and e-zine targeting Tampa Bay’s African American community.


Nikki Gaskin-Capehart
Is Director of Communications and External Affairs for the Pinellas County Urban League of Tampa Bay. She is the former Deputy Director for U.S. Congresswoman Kathy Castor.


Joel B. Giles, Esq.
Is an attorney with Carlton Fields and practices in the areas of complex real estate and commercial transactions. He represents the developers of large mixed-use, commercial, and residential projects.


Cedric Gordon
Is a former Assistant Chief of the St Petersburg Police Department where he completed over 31 years of distinguished service.


William ‘Bill’ Heller, Ph.D.
Is Dean of the College of Education at USF-St Petersburg. He is a former member of the Florida House of Representatives and Army Paratrooper.


Bob Jeffrey
Is a historic preservationist and former City of St. Petersburg employee who led the revisions to St Petersburg’s Land Use Ordinance.


Carl R. Lavender, Jr
Is a retired executive with forty years’ experience in the non-profit industry. Carl served the majority of his professional career with Boys & Girls Clubs of America advancing professionally from youth leader to Executive Director.


Lorraine Margeson
Created and built a successful small business, Donlo Communications, Inc. along with her husband Don. She is a noted community and environmental activist and former candidate for the St. Petersburg City Council.


Brad Miller
Is Chief Executive Officer at Suncoast Pinellas Transit Authority and former Director of Operations at the Charlotte Area Transit System. Ed Montanari Is a pilot for American Airlines and has served with multiple community  boards and organizations. He is a former Air Force officer and Vice Chair of the Pier Advisory Task Force.


Brother John Muhammad
Is a community organizer with a Certificate in grassroots Leadership from USF-St Petersburg and President of the Childs Park Neighborhood Association in St Petersburg.


Mary Anna Murphy
Is President of MAM Exhibit Design and Chair of the City of St Petersburg Public Arts Commission.


Rev. Louis M. Murphy, Sr.
Was installed as the Senior Pastor of Mt. Zion Progressive Missionary Baptist Church in St Petersburg in May 1999. He is one-time Drum Major for the Florida A&M Marching 100, previous, former non-commissioned officer in the U.S. Marine Corps and District Executive for the West Central Florida Council of Boy Scouts of America.


Rick Mussett
Is Senior Administrator for City Development with the City of St. Petersburg where he began his employment in 1980.


James G. Newman, CPA
Is a shareholder and Managing Partner in the certified public accounting


firm of Gregory, Sharer & Stuart. He was one of the founding members of the Heroes of the St Petersburg Policy, a non-profit that assists the


families of St Petersburg Police Officers in times of need.


Will Newton
Is the Florida Professional Firefighters 2nd District Vice President and former President of the St. Petersburg Chapter of the International  Association of Firefighters.


Karl Nurse
Is Chair of the St Petersburg City Council, representing District 6, focusing on innovation and sustainability issues across departments. He is Co-Owner of Bay Tech Label and rehabilitates single family residences.


Craig Sher
Is Executive Chairman of the Sembler Company of St Petersburg. He is a member of the Board of Trustees of All Children’s Hospital and former member of the ABC Commission that looked at potential new sites for the Tampa Bay Rays.


Rick Smith
Is currently Chief of Staff for the Florida Public Services Union which represents 25,000 workers in the state including the City of St. Petersburg where he has been the Chief Negotiator for the last 4 agreements.


Herb Snitzer
Is a nationally renowned photographer that has been featured in many periodicals including the Saturday Evening Post, Fortune, Time and the New York Times. His career spans over 50 years of provocative image-making.


Sophia Sorolis
Is Co-Director of the Greenhouse, a new business development collaboration between the City of St Petersburg and the St. Petersburg Chamber of Commerce.


Chris Steinocher
Is President and CEO of the St Petersburg Chamber of Commerce and former Chief Operating Officer of the Tampa Bay Partnership.


Rev. Dr. Manuel L. Sykes
Is Pastor of Bethel Community Baptist Church in St. Petersburg, Florida. He holds two Doctoral degrees and is a key member of the ecumenical organization FAST; Faith and Action for Strength Together.


Rev. John G. Tapp
Is Pastor of Holy Family Catholic Church in St Petersburg and a key member of the ecumenical organization FAST; Faith and Action for Strength Together.


Rabbi Michael Torop
Has been serving as the Rabbi of Temple Beth-El, a diverse Reform congregation of approximately 450 families in St. Petersburg, Florida since 2001. He is also a key member of the ecumenical organization FAST; Faith and Action for Strength Together.


Katee Tully
Is a former University professor and administrator as well as former Executive Director of the Morean Arts Center.


Donna Welch
Is a community volunteer that has been involved with a number of local organizations including children in the Child’s Park neighborhood.


Tonjua Williams, Ph.D.
Is the Senior Vice President of Student Services at St. Petersburg College. Tonjua has held various positions throughout her 26 years of experience in higher education. She was recognized as the 2011 Jr. Achievement Educator of the Year for Pinellas County.


Ann Wykell
Is former Manager of Cultural Affairs and International Relations for the City of St. Petersburg.


Missing seems to be representation from the retired community, Gen-X, the millennials to some degree and the Mayor's neighborhood West St. Petersburg and the Tyrone area which the St. Pete Chamber DOES NOT represent.


Well represented are lawyers, downtown and activists, unions and south St. Pete. What the Mayor needs to be aware of is the loud voices are not the only voices.


As I have said before, how about a plumber, carpenter, retired person, beauty salon owner, small business person, some people without the long list of credits - just some people who live here?


As Bill Foster found out, when you ignore the more numerous but often softer voices things don't go well.


e-mail Doc at: dr.webb@verizon.net, or send me a Facebook (Gene Webb)Friend request.