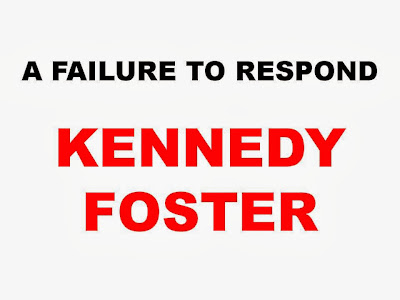 This past week I Posted the Candidates to responses the questions you submitted to PATCH. Despite repeated e-mails to the Kennedy and Foster campaign and a call to Mayor Foster's campaign, the two incumbents, Jim Kennedy and Bill Foster, would not reply.

Here are the links to the Posts District 2, Mayoral Candidates .

If you go back and check the Primary election you will note neither of them responded to those seven questions either.
If these were my questions, or they were loaded questions, or I was going to edit the answers or respond to their comments in the Post, I could kind of understand. The fact is all of the candidates answers were posted with NO EDITING and all comments were posted with no editing. The question becomes: why will Foster and Kennedy not respond to your questions? It seems to me this is a continuation of Foster and Kennedys' steadfast opinion that they do not have to respond to your questions and they do not need to consider your opinions. Basically they think it is simply OK to ignore you.
So they have.


Kennedy often speaks about what he calls "representative democracy". His definition is you elected him do whatever he thinks is best regardless of your opinion. Kennedy has been on the wrong side of every issue from the Pier to Red light cameras.


He ignored to police chiefs' warnings about downtown and pushed ahead with 3:00AM bar closing putting downtown awash is a sea of drunks and late night violence. His total disrespect for the City and its people is not being able to stay awake on the dais.


Jim Kennedy does not represent you, he does not respect your views or opinions and he does not deserve your vote. It's time to send Jim Kennedy back to his quiet law office where he can nap without screwing up the city any more than he already has.


Apparently Bill Foster has flip flopped so many times he can't figure out an answer to any of these 5 questions that won't conflict with a previous position on the issue.


Once again the mayor isn't really interested in what you think or your view of the issues. Like Kennedy he loves red light cameras, (mostly the money) vacillated on the Pier and is largely responsible for the debacle that caused the referendum, closed the Pier in spite to show you he was boss and put 400 or so people unnecessarily out of work.


He can't get a deal with the Rays because they don't trust him and he is sure not going to answer YOUR questions because he really could care less about what you think.


So there you have it.


You, THE VOTER, have been completely shunned by your two incumbents Jim Kennedy and Bill Foster.


Why don't you treat them exactly like they are treating you.


Ignore them and vote for Rick Kriseman for Mayor, and Lorraine Margeson for City Council District 2.


Let's put some people in City hall that can stay awake and stay focused on what the people want.