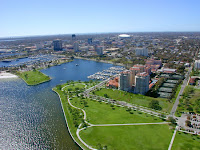 It was a directed tabletop visioning session and it was very well done. The City staff, lead by Dave Goodwin, has developed a very effective format for these meetings that efficiently solicits a large amount of very useful information.

It also helps that there were a number of people there who had participated in this type of visioning meeting before and that helps the process run very smoothly.
What is impressive about these meetings, and you can see it in the photos I have attached, is the level of concentration of the participants. They really go to work and work hard.
Over the next week or so, City staff will spend many hours accumulating, categorizing and analyzing the information collected Monday night. The process will be very objective and much of it posted on line. Check the City's web site
The next steps will be an assessment by an outside planning firm, followed by the hiring of a planning consultant to develop the draft master plan. All of this being driven by a Charter Amendment passed in 2011 that mandates the Waterfront Master Plan be completed by July1, 2015.
The crowd at Monday's meeting was interesting. Virtually all age groups were represented, the baby boomers, the gen-X folks and the new millennials.

What was missing in my observation was diversity.
While the age diversity was exceptional, the ethnic diversity was sparse. Missing were the Asians, Hispanics and African Americans in anything close to numbers that represent their percentage of the local population.
In speaking with a couple of City officials, they noted the problem and then asked "how do we address that problem?"  Interesting question.
It is probably a good bet that the Water Front is not the highest priority on the minority community's agenda. It is more likely crime, jobs, and the deteriorating school system in St. Pete.
Candidates might want to take note.
Bringing  the minority communities into the Water Front Master Plan development process, is going to be a challenge, but the City should make a good faith effort.
Be sure to comment below or you can e-mail Doc at: dr.webb@verizon.net, or send me a Facebook Friend request.
Campaign Disclosures: Contributor to Kathleen Ford Campaign, Darden Rice Campaign, Concern Citizens of St. Petersburg, Rick Kriseman for Mayor