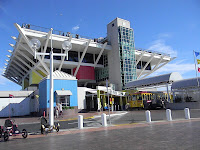 Nothing like a couple of feigned City Council members.

Danner and Curran, the self proclaimed artistic conscious of the community, pouted Thursday about the slap on the posterior recently handed them by the public.
The Mayor, in typical Bill Boy fashion, tapped danced all over the issue.
Dudley, who should exert all efforts to remain silent at all times, weighed in with: he had heard the Pier might remain untouched for 5 years.
Newton wants to restore the inverted pyramid and Charlie Gerdes supported surveying the community to get an idea of what they want.
Foster will do almost anything he has to too end the inverted pyramid, including going out there and personally dismantling it piece by piece. His absolute goal is to see the inverted pyramid residing in a land fill somewhere.
Don't let all of those Foster assurances, smiles and grins mislead you, Bill will do anything to destroy the existing Pier. He thinks you deserve it.
The other thing that I don't get is all of this fascination among some with an "international architect". What's wrong with a national architect, a Southern architect, a Florida architect, or even a local architect?
I know, I know they are not artsy enough.
Gerdes, who more and more finds himself the voice of reason on City Council, has a good idea.
Let's spend some time finding out if there is even a broad consensus on what the public wants. The offer from  StPete Polls to conduct a telephone survey is a great start, and maybe a ballot in the water bills would also produce some good information.
Refurbishing the existing Pier may be what the people want. If it is then the City administration must embrace that idea and move forward, not try to end run the publics' desire. That would be a bitter pill for Bull Dozer Bill, should he get reelected.
Realize this: the public's view will likely not be an iconic piece of art. It will be a more practical and functional concept. The challenge will be to find an architect or design firm that can take that concept and convert it into a smart design, not a stupid one like the LENS.
The arts community and the artsy, need to take their seat in this effort where they belong, in the second row. Give artistic input, just don't try to once again hijack the project and convert it into an impractical icon.
e-mail Doc at: dr.webb@verizon.net, or send me a Facebook Friend request.