The Police Chief and the Election 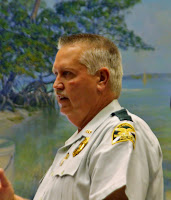 There may be more to Police Chief Chuck Harmon's announcement of his retirement than at first meets the eye. Harmon will retire on January 6, 2014, shortly after the new Mayor is formally sworn in.


Harmon's retirement has not been a secret up to this point, so a valid question is why make a big announcement now just as the campaign for the general election is kicking off?


Short answer, Harmon would like to have some serious say in who his successor is.


It's easy to underestimate Chuck Harmon. That sort of small town police chief persona can be compelling. Harmon is an intelligent police chief who successfully navigated some difficult political times under Rick Baker and has been several steps ahead of Bill Foster since the Mayor was elected.


Case in point, not many police chiefs would have let even the Mayor bulldoze a crime scene where two police officers and a suspect were killed before a complete and careful investigation of the scene.


Pass on all of the humble pie coming out of the Police department from Harmon right down through the Public Information office. These guys are all about being in control and they do not want Bill Foster or Rick Kriseman going off the rails in selecting a new police chief.


Harmon's announcement will move the "who will be the next police chief?" question to the forefront of the Mayoral debates and forums.


The St. Pete African American leadership, already concerned about the diminishing role of black leadership at the PD with the recent retirement of Assistant Chief Cedric Gordon and Sergeant Al White, will begin lobbying for an African American chief.


The PBA(police union), already on the hook supporting Bill Foster, will be lobbying for a say in  the decision. With some polls already showing Kriseman with a slight lead, and Foster's knee jerk reaction that he will go on a "national" search is probably already rattling the PBA leadership.
Nobody at the PD wants to deal with an "unknown" the last couple have not worked out all that well.


There will be a major scramble to decide who will be on the Police Chief selection committee, look for a lot of pressure to set that group up as soon as possible.


Regardless of what he says in public, Harmon has an in-house favorite and he will quietly begin lobbying in that direction. Don't be too surprised if an in-house name leaks out of the PD in the next few weeks.