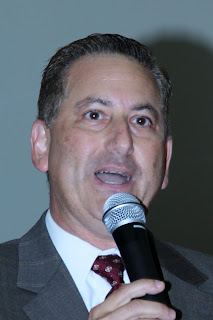 
I sat down Saturday morning at Starbucks out on the West side of town with Rick Kriseman and his campaign manager Cesar Fernandez.


To win over Kathleen Ford supporters, Kriseman needs to deal with these 6 major issues.


If you have been to any of the mayoral debates or watched them on television, when this issue comes up, it will often be one of Rick  Krisemans' more emotional moments. Perhaps more than either of the other mayoral candidates, Kriseman recognizes and feels the plight of South St. Pete. He also knows there is no quick fix and that it all begins with education and jobs.


He wants to increase the emphasis on neighborhoods, change the policing model with more emphasis on community policing and focus on economic development. He has some really good ideas on the Dome industrial district.


With the 828 alliance proposal just out, Kriseman is still looking at the process. His biggest concern remains making sure there is leadership that prevents a meltdown like occurred on the LENS.


Pivotal in Rick's view is that there be steady, verifiable and consistent public input.


He wants a functional solution that works for the local citizens and functions as visitor attraction. Refurbishing the existing pier, a Ford hot button, is not off the table, but Kriseman wants a complete vetting, a careful review of costs including subsidies and full public participation.


Kriseman is a strong candidate. Well experienced and knowledgeable enough of both the operational aspects and politics of City Hall to step right in and pick up all of the unresolved balls the current administration has left up in the air. There will be no on the 'on the job training" required, he is ready to go.


There is a lack of confidence in Bill Foster among city staff and the public that Rick Kriseman can quickly overcome. As a staff member you are never sure where Bill Foster is coming from and where he may end up.


If Kriseman has learned anything from his time on City Council and in Tallahassee it is you must have objectives and communicate them effectively in order to lead. There is nothing wrong with changing directions or positions, you just can't do it daily on impulse


The outside money issue may take care of itself if the Republican Party decides to jump in and help Foster. If not the issue will plague Kriseman throughout the race.


To win Ford's supporters, Kriseman needs to go all in and jump on the no red light band wagon.


There will be some activity on the Pier in the next few weeks as Foster tries to figure out how to deal with the 828 Alliance position paper. Kriseman needs to watch carefully and pick the right horse in this contest.


I like Rick Kriseman for Mayor of St. Petersburg. He will be a good Mayor for the City and a good leader for the organization. Kriseman can re-energize staff by providing leadership and confidence. His views on neighborhoods, South St. Pete and the Pier are solid.


I think the Rays will find someone in Kriseman they can talk to and trust. Kriseman will be a good negotiator without raising the rhetoric with the Rays or Tampa to an unbearable level. I personally think Sternberg can find more common ground with Rick Kriseman than he has with Bill Foster.


It is probably accurate the Kathleen Ford's supporters may hold the key to this election. As a Ford supporter I think I know what our issues are, and I will be following the campaign from that perspective.