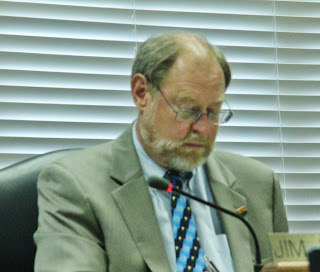 Tuesday nights St. Pete election debate at NOVA on MLK Street featured all of the candidates. The first section was allotted to the City Council candidates, the Mayoral candidates last.

Mitch Perry, of Creative Loafing, did an outstanding job of moderating both the Council candidates debate and the Mayoral debate.
By now, all of the candidates, except one, seem to have their issues, stump answers and talking points pretty well in hand.
The exception Tuesday was Jim Kennedy the City Council incumbent for District 2.
In a rumpled suit Kennedy looked like a throwback to Colombo of the long past television detective series and at times almost sounded like the often rambling detective.
Kennedy got up and walked out front to present every answer. Maybe he was trying to stay awake.  No other candidate did.
He wondered way off point on many of the questions. It was almost like he couldn't remember the question once he started talking.  It was late so maybe we were keeping him up.
When addressing a question about his accomplishments, he mumbled through a long list of committees he has served on but included no major contribution he had made to any of them. Perhaps he slept through most of those meetings.
I can help here a bit. Kennedy voted in favor of the LENS on every vote, has been a strong supporter of Red Light cameras(they kicked in $1000 to his campaign), ignoring the Police Chief's concerns was the most vehement supporter of keeping the downtown bars open until three AM, was supportive of keeping food trucks out of St. Pete and has backed Bill Foster on every issue.
After 6 years on City Council, Kennedy should be better prepared to indicate where has been and where he thinks the City should be headed. Kennedy's theme seems to be support for the transportation tax initiative which isn't even on the ballot until next year.
High light of the evening was Bill Foster walking over to Kennedy and congratulating him for a fine job on the debate panel.
Kennedy's performance Tuesday evening was not only an embarrassment for the candidate, in many ways it was an embarrassment for the City.
Kennedy has a chance to answer many of these questions in our It's Time To Go On the Record Questions. He has yet to respond and did not respond to our primary questions.
It is time for change.
Be sure to comment below or you can e-mail Doc at: dr.webb@verizon.net, or send me a Facebook Friend request.