The LENS is It Really Over? 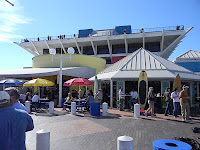 
Once again it has been reinforced that in a democracy government cannot simply inflict its will or the will of small minority on the people.


What is unfortunate about all of this is that it had to come to a bitter argument, two petitions and a lawsuit to get the issue of poor governance resolved.


You can lay all of this strife and discourse squarely at Bill Foster's feet. Oh, he will try to pass the buck like he usually does saying he was for a vote after he was against a vote, but the simple fact is Bill Foster provided no leadership on the Pier or the Pier issue.


The real question is what will Bill Foster do now?


Will he let his 828 commission proceed on its own with little or no leadership? Will he let the Pier once again sink in a pit of controversy and indecision or will he provide some serious leadership at the table and facilitate  828 to working conclusion?


Just like the Inverted Pyramid, the LENS could easily resurface. There is absolutely nothing in the Ordinance required by the ballot that prevents City Council from canceling the Maltzan contract following the Ordinance with proper notification, and then simply reinstating the project.


Is that likely to happen?


Probably not, but then there is a lot of time between now and when the new council members take their seats. Will Bill be on top of this one? If the past is any indication, by the time he figures out what is going on it will be too late.


The Stop The LENS people need to be on high alert. They cannot simply set back even after the Ordinance is passed, if it is, and rest assured it's over.


It would be foolish to underestimate the forces that got us here. They will not simply walk away. There is way too much at stake.