How You Plug the Real BP Leak - The Vultures are Circling

A few weeks ago I wrote here in the Blog about BPs Other Big Leak. The implied question was when and how do you stop the flood of money leaking from BP coffers. Here is likely the beginning of the answer from American Marketing and Banking News: http://www.americanbankingnews.com/2010/07/06/exxon-mobil-nyse-xom-and-shell-may-consider-bidding-for-bp-takeover-nyse-bp/

“Exxon Mobil Corp (NYSE: XOM) and Royal Dutch Shell Plc (NYSE:RDS.A) may consider take-over bids for BP Plc (LON: BP) after the British oil company lost more than half of its market value as a result of the Gulf of Mexico oil spill, said JPMorgan’s Cazenove Ltd. BP’s market value has dropped by more than $100 billion since the April 20th explosion onboard the Deepwater Horizon drilling rig which killed 11 crew members resulting in an unprecedented oil spill in the Gulf of Mexico. BP has set aside $20 billion to pay claims related to the spill and said last week that the total cost of the spill had already reached $2.65 billion.”

A BP bankruptcy is out of the question it would send a shock wave thru the oil industry that would have investors running for the exits. Oil is a big buck business. The big players need access to the equity markets to keep drilling and they will not let BP take the industry down. Easiest way out, buy out BP or at least the North American assets, limit the total liability in the sale agreements. EXXON sure has plenty of experience in stringing these deals out over time. Look at Alaska.

How do you do a deal like that in the light of all the political pressure? Simple. Tell the Obama administration what the acceptable terms are, set absolute limits of exposure, and get their buy in on the deal. The leverage? The industry threatens to walk away, blame BP for the whole and then let BP fail. BP can drop maybe another 50 billion in market value but somewhere there is a point where even the vultures find the carcass distasteful. BP slides in to bankruptcy or worse just fails completely. Big oil cries a few heartfelt tears for their unfortunate BP brethren and you might actually see gas prices go down for a while to assure the public there is plenty of gas and heating oil for the upcoming winter. After a time various industry players through multiple holding companies gradually pick off what little meat is left on the BP bones and those with claims are left holding a very empty bag.

What about the politicians? The Jindals, Crists, Barbours and all of those fine local and state Representatives and Senators who were going to hang their political careers on BP bashing better take deep breath. If BP goes belly up and shuts down the clean up and the claims efforts who do you think the public and all of those out of work shrimpers and crabbers are going to turn on? You politicians who let this happen. The Obama administration could find themselves on the hook for the rest of the clean up. Another financial disaster for an already deeply stressed administration.

Sound far fetched? Look at the wars we have fought over oil. Think about how the US was maneuvered into some of these wars and conflicts. Big oil may be big but it is neither dumb nor cowardly. Oil is a tough business from the Mideast to Texas to Alaska to the North Sea these guys are survivors. They will do what ever is necessary to get thru this mess. Get in their way and you will be in big trouble.

The effort to plug the real BP leak has begun. Look for players from around the globe. The Mideast, South American, Russia and others. The states, and likely the Obama Administration, are way out gunned on this one. This problem will be resolved big oil’s way. If the current crowd of politicians doesn’t to play by big oils’ rules, big oil will elect a group who will.

Watch for a gradual backing away from BPs position “we will be here as long as it takes”. Not with BP market value falling like it has for the last few weeks. First early warning sign could be the disappearance of the fine gentlemen who volunteered for the BP claims management job. You know the one who was born in Louisiana. When you see the frequency of those commercials drop or the message change even slightly, watch out. My advice for those with claims; the old Chicago voting mantra. File early and often.

There is a bottom in the barrel. That bottom may well be defined by EXXON and Shell.
Posted by E. Eugene Webb PhD at 8:38 AM No comments:

I am sitting here at my desk staring at my mail in ballot. The question is not so much who to vote for, but should I vote or wait? On the corner of the desk is a growing stack of campaign mailers with more showing up each day. Is there a new revelation, some more information… what to do? The millionaires running are impressive, but there is a lot to be said for experience. Most of these people running for Judge I have never heard of and many of them seem so young to be a judge. Oops profiling…

I kind of like the bald guy running for governor. I figure anyone clever enough to wiggle out of all that Medicare fraud would probably be a pretty good politician, not so sure about being governor. His principal opponent on the other hand looks like a worn out sleaze ball, but he does have good taste in private aircraft. In the Senate race I am already on record as being in Christ’s corner on this one. I think Rubio is a political hack. Greene reminds me of Jimmy Hoffa, kind of looks like him and he talks out the side of his mouth. Watch him carefully in the next TV spot. Meek? Well the name says it all. I think I’ll vote for Kogut. Didn’t he have a relative that was a Latin band leader?

The School board? That place is such a snake pit I don’t think it matters who you vote for.

Maybe I’ll wait a few days.
Posted by E. Eugene Webb PhD at 7:21 AM No comments:

I’ll just admit it I like Kathleen Ford. Smart, sharp on point. I liked her when she was on City Council, I liked her when she ran for Mayor the first time and I really liked her when she ran for Mayor in 2009. I think without the HNIC comments things might have worked out differently. Kathleen could use a handler.
Anyhow, that’s all water under the bridge. Just the hint of a Ford candidacy for City Council or Mayor will send shivers down what little spine Mayor Bill has. Council has become a social club, conducting business in the room below Council chambers mostly out of public view. Think about it. When was the last time you saw some really tough questioning of staff or some special interest group on TV? Been a while hasn’t it.

Like her or hate her, if Ford was Mayor Stu and his crowd would not be pressuring the City for anything. They would be ducking for cover. There might be a few less senior staff members, but the organization would have a direction and leadership. I doubt the City would be closing libraries or ignoring organizations like CONA, and you would know what’s going on. Kathleen would make sure of it.

Note to Kathleen: Time to heat up the old website.
Posted by E. Eugene Webb PhD at 8:07 PM No comments:

The Emerging New Face of the GLBT Community 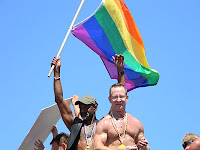 St. Pete Pride was fun, exciting, colorful and different. I have been at every St. Pete Pride event and have watched the event and the GLBT community grdaually morph into a new exciting and vibrant social movement. It seems to me that the Pride event has become more about who the GLBT community is than what they are. The GLBT community spans the entire spectrum from blue collar worker to corporate executive and all seemed to be represented.
The crowd was younger, more conservative in dress and attitude and seemed genuinely interested in the attention being shown by the political candidates and the many big name business and industries represented in the parade. What was even more impressive was the friedliness of the crowd and the many groups of people talking where subjects ranged from politics to where to go for lunch.

St. Petersburg should be proud of Pride. I am. It is an event that represents diversity and tolerance, while being a showcase for the dynamic changes in the GLBT community. If you can wipe the stereotype from your eye and take a fresh look you’ll be surprised at what you see.
Posted by E. Eugene Webb PhD at 7:14 AM No comments:

An Opportunity for the St. Pete Chamber of Commerce

The departure of John Long as Chamber Chairman comes at an opportune time and presents the Chamber with an opportunity to become more affective in the community at large. John Long may have met his goals but I’ll bet there are a lot of small downtown businesses and City wide residents that think the goals weren’t on target in the first place. A large well heeled membership with their own special interests at heart doesn’t really serve the community at large. About the only time I saw John Long was when was at City Council pushing for something to benefit downtown. Seems like the Chamber’s interest stops somewhere just east of 16th Street.

Let’s hope the more community minded members of the Chamber get out the binoculars and look west. I have a suggestion for Chairman, how about Jeff Knight. Now there’s a guy with some vision.
Posted by E. Eugene Webb PhD at 7:25 AM No comments: