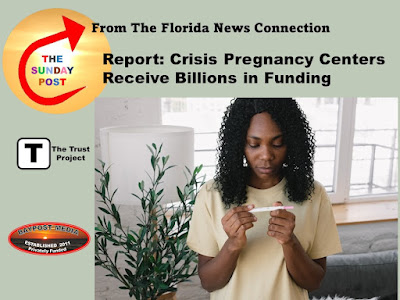 In the ongoing abortion debate, people are being warned to be mindful of deceptive practices in the facilities known as Crisis Pregnancy Centers.

Jamarah Armani provides midwifery care using the "birth justice" model, based on giving birthing people the power to make decisions for themselves and their families at all stages of pregnancy and birth.

Armani, who also heads the Southern Birth Justice Network, said when a person comes to her for care, she does not talk about the baby until she knows they have envisioned themselves having a baby. In other words, she said, until they've decided it's a baby, it is a pregnancy.

"I think that's the difference between quality care and the type of care people are receiving at Crisis Pregnancy Centers, where they've already decided for this person before they come in the door that they want them to keep their pregnancy," Armani explained. "For me, like, that's not my decision to make. That's the pregnant person's decision to make."

Supporters of Crisis Pregnancy Centers say they help by offering free services, like diapers and breastfeeding classes. A report from the National Committee for Responsive Philanthropy based on IRS records found the centers and their tax-affiliated organizations took in $4 billion from 2015 to 2019.

Stephanie Peng, senior manager of movement research for the National Committee for Responsive Philanthropy, said the pregnancy centers often have ties to much larger organizations, many affiliated with the anti-abortion movement.

"There's this common misconception that CPCs are just really small, individual-run organizations that are all volunteer-based; they might be operating out of a church," Peng pointed out. "But what we found is that $4 billion is a substantial amount of revenue that they are getting."

Florida has 150 Crisis Pregnancy Centers, as the state with the second-highest number in the nation. Florida lawmakers allocated at least $30 million to the Florida Pregnancy Care Network, which has supported the centers since 2009.

The report recommends charitable donors and foundations check to see if the nonprofits they support are funneling money to the centers.