Rail Cartel Pivots In Their Hamster Wheel to Push Another Rail/Transit Tax That May Be Unlawful: Don't Be DUPED Hillsborough! Vote NO! 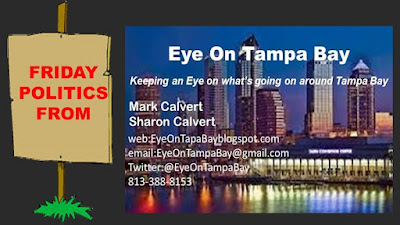 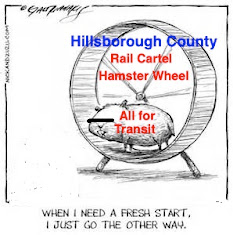 The exclusive members of the rail cartel have officially pivoted the other way in their hamster wheel. They have poll tested messaging that appeals to voters.

The rail cartel will use their poll tested messaging to lie to voters again. The privileged rail cartel members have begun their campaign to dupe voters about AFT's do-over 30 year ONE PERCENT (NOT ONE CENT) $18 BILLION rail tax - just as they did in 2018.

With poll tested messaging in hand, now the privileged wealthy special interests money is flooding in again. The same special interests cronies who funded AFT's UNLAWFUL and ILLEGAL 2018 rail tax are opening their wallets for another potentially UNLAWFUL rail tax for Round 2. 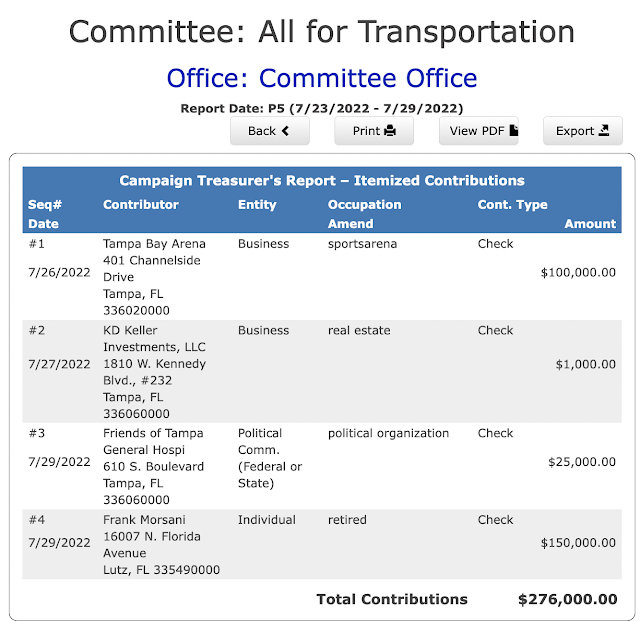 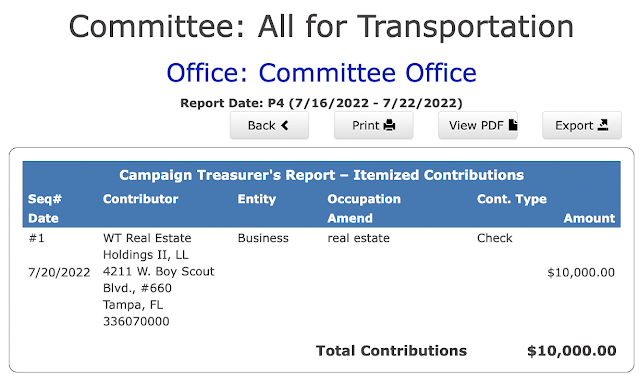 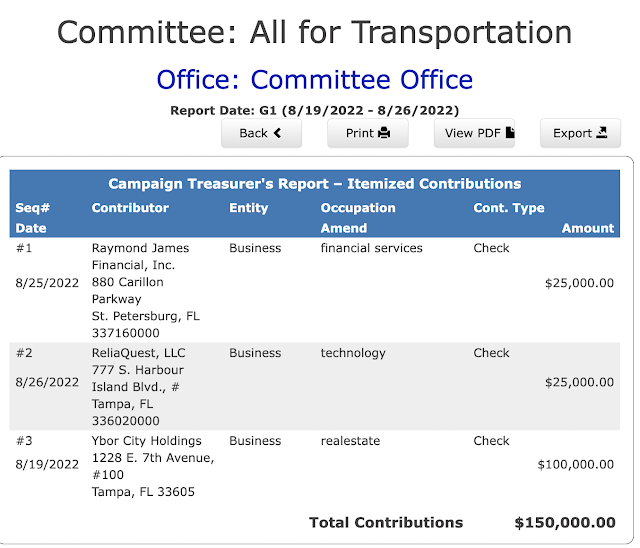 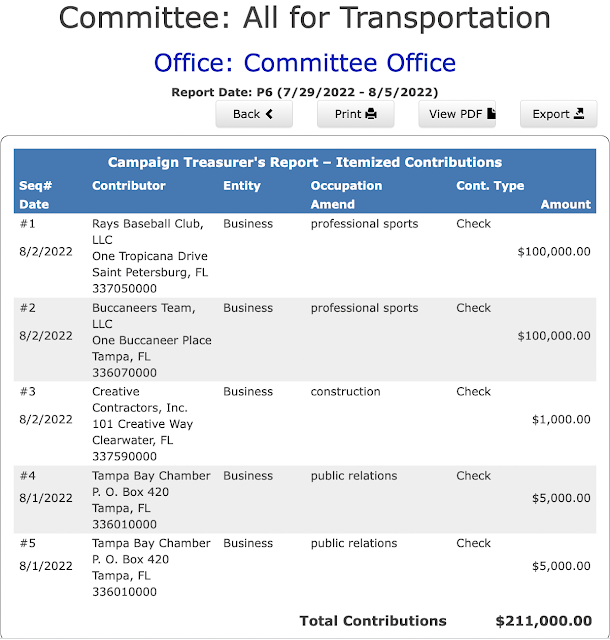 The Tampa Bay Partnership (TBP), the structural head of the rail cartel, is an exclusionary organization: "Membership is by invitation only." TBP's privileged members, who reside in their exclusive groupthink bubble, have been unsuccessfully pushing massive rail tax boondoggles for decades.

In 2018 when the illegal rail tax was rammed onto the ballot, TBP's

In 2018 the members of the TBP Leadership team included WSP (formerly Parsons Brinckerhoff of the infamous 2016 Go Hillsborough rail tax scandal so beware of the $700K taxpayer funded HNTB campaign for the AFT do-over rail tax), the Bucs, the Lightning (Vinik) and Ybor land developer Darryl Shaw. Vinik, Shaw and AFT donor Frank Morsani helped financially bail out the Tampa Bay Times in 2017 when the Times was going bankrupt.

Thus in 2018, the Times protected their privileged financial benefactors. The Times refused to report and inform the voting public about the potential legal issues with the 2018 AFT rail tax referendum. That information was provided by both County Commissioner Stacy White and provided in writing by rail tax opposition PAC NoTaxForTracks to Times reporter Chris O'Donnell. That censorship was a total disservice to the voting public who may have rejected the rail tax in 2018 if they had known the tax may be thrown out as unlawful.

Instead of reporting about the potential legal issues, the Times published puff pieces for the rail tax while ignoring those who opposed the egregious tax.

Today's TBP Council of Governors includes Brian Butler, the CEO of Vistra Communications. Vistra, a PR and marketing firm, is being sued regarding the $2.6 MILLION of ZuckBucks funneled to Vistra in 2020 through a no-bid single sourced contract by Hillsborough County SOE Craig Latimer. Vistra used the ZuckBucks to launch a PR GOTV campaign, directed by the SOE, a government, taxpayer funded agency, to target exclusionary voter demographics.

The TBP's current Council of Governors also includes the Rays, TECO and Duke Energy (remember that when your energy costs are skyrocketing) and USF President Rhea Law.

While the exclusive Tampa Bay Partnership may structurally lead the Tampa Bay rail cartel, the leader is obviously Jeff Vinik. We can reasonably assume that TBP got the message from AFT's largest donor Vinik that it was time for them and their privileged members and allies to start doling out the dollars for AFT's do-over rail tax campaign.

In 2019, we reached out to then TBP CEO Rick Homans. We asked him why TBP and their members contributed millions to the unlawful 2018 rail tax charter amendment without ensuring it was legal.

Homans responded to my question with "the Partnership analyzed the amendment through its own process and, ultimately, relied on the expertise of the professionals who drafted the language."

I followed up by asking Homans who were the persons he referred to as the professionals who drafted the ballot language. Homans punted by responding that any specifics about who actually drafted the language would have to come from AFT but that they felt confident the language of AFT's charter amendment was A-OK.

In 2018, AFT told the public they were just a "grassroots" group who drafted their rail tax language. They lied because AFT was astroturf funded by wealthy cronies who would greatly benefit from the rail tax. TBP's Homans admitted professionals (whoever they were) drafted AFT's rail tax language not "grassroots" citizens. Everything about AFT's rail tax in 2018 was built on lies.

The TBP and rail cartel elitists are surrounded by lawyers. Yet they donated MILLIONS in 2018 to an illegal rail tax. There is no excuse for what they did to the voters and taxpayers in Hillsborough County.

These exclusive rail cartel elites are largely to blame for why Hillsborough County still owes taxpayers a refund of over $560 MILLION. Apparently they do not care and/or the end justifies the means as they pursue another potential legally flawed rail tax referendum.

The rail cartel privileged members have direct access to power brokers, decision makers, like minded inside bureaucrats, "friendly elected officials (Tampa Centric 5 Democrat county commissioners who put the do-over rail tax on the November ballot - Vinik donated to the 4 running for re-election) and "friendly" local media allies who support the rail tax. These rail cartel allies will cover for their deception and dishonesty.

In April 2018, Dr. Jim Davison presented his alternative transportation funding plan that requires no new tax hike to the BOCC. He sent the plan to the Tampa Bay Times and other local media in July 2018. The Times told Davison his alternative funding plan was not "newsworthy" and they refused to publish his Op-Ed.

The AFT citizen petition rail tax initiative began in June 2018 falsely claiming their massive tax hike was the only solution for funding transportation. Censoring Davison's information in 2018 enabled the Vinik funded AFT to continue making their false claims. Such censorship again was a disservice to the voting public.

Below are the privileged rail cartel members who funded the 2018 ILLEGAL rail tax and how the rail cartel exclusionary elitists are connected. We have highlighted who has already doled out dollars to the POTENTIALLY UNLAWFUL AFT rail tax do-over on the November ballot. Deja Vu! This is the cartel those opposed to the rail tax boondoggle will be fighting again. 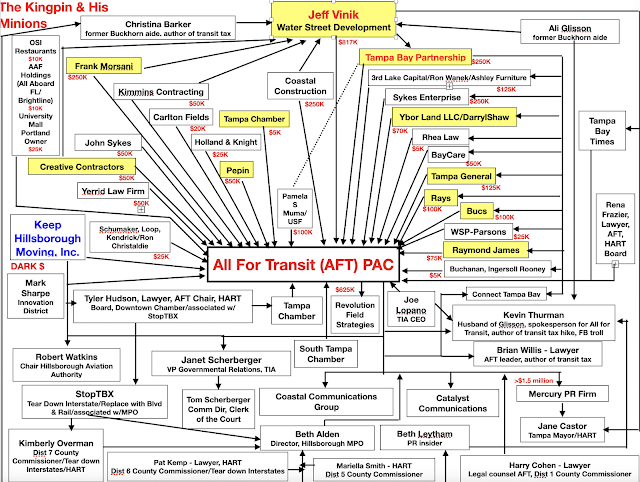 The privileged rail cartel elitists will spend millions between now and November 8th lying to voters about their $18 BILLION inflationary rail tax - that benefits them.

The exclusionary rail cartel members want taxpayers in unincorporated Hillsborough to pay for costly rail in Tampa where over half of the $18B tax hike will be spent but where only a third of the population resides. Vinik's WaterStreet District revenue raising powers and city of Tampa revenue sources can pay for their own Tampa trains.

Hillsborough County can fund its transportation NEEDS with existing revenues and WITHOUT a massive new tax hike. But that requires fiscal responsibility and proper prioritization of the County's budget - something the rail cartel elites have never demanded be done.

Voters must not be DUPED again by AFT's deception and dishonesty.

With a legal challenge already filed, taxpayers must never endure another legal mess or $560 MILLION refund debacle caused by an unlawful and unnecessary tax hike referendum.

Vote NO in November!

Anyone who would like to help in the fight against the rail cartel and their rail tax do-over can donate to the formal opposition PAC NOTAXFORTRACKS (NTFT) here.

For Transparency - please note that I am Chair of the NTFT PAC.

Posted by Sharon Calvert at 2:29 PM