Martha’s Vineyard - A Day that May Last a long Time in Political History. 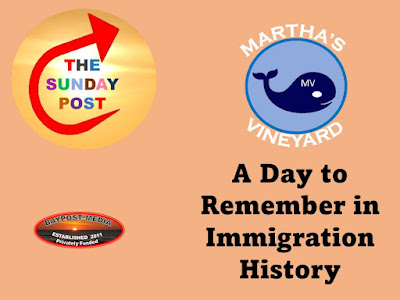 As the storm continues to rage around Governor DeSantis’s decision to export immigrants from Texas to Martha's Vineyard, the early outrage seems to be focused on the immigrants and their treatment.

There's a lot to what has gone on regarding Martha's Vineyard. It has an almost unbelievable number of moving parts.

This whole debacle has all the attributes of an incredibly riveting novel or movie. However, there are several questions that I haven't heard posed yet so I thought I would raise them here:

Whose idea was this in the first place? Did it originate in Texas? The governor of Texas has said no.

Did it originate in Florida? At this point, nobody knows.

How or by whom was the Texas/Florida connection made?

Who rounded up the immigrants in the first place?

Who made the decision to take them to the airport and turn them over to whoever was responsible for flight operations?

Who coordinated the transfer of funds to pay for all of this?

Was any money paid to anyone in Texas to coordinate this plot?

Like I said above: there are a lot of moving parts here!

Governor DeSantis by himself, or with the assistance of his closest advisors, either willingly participated in this event or were duped by somebody they trusted.

Governor DeSantis is no dummy. It is almost impossible to believe that when presented with this plan DeSantis could not have anticipated most of what has unfolded in the press, from some of his closest supporters, from immigration activists and the list goes on.

Several people have already called for an investigation by the Justice Department, and I for one think that is fully warranted.

Anyone from DeSantis right on down who violated any law or committed any crime should be prosecuted to the maximum extent of the law.

Think about it this way. The next plane load of people the DeSantis decides to pack up and ship somewhere could well be teachers, preachers, or members of the opposing political party that don't agree with the governor's political dogma.

I would suspect the destination of that flight will not be nearly as pleasant as Martha's Vineyard.