The Hillsborough County School Board Tax Referendum Fails to Pass 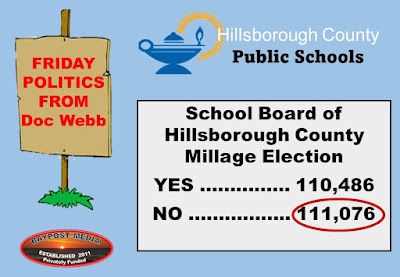 It would be wise not to read too much into the failure of the Hillsborough County school Board's recent tax referendum.

The referendum question was on the midterm primary election ballot. Hillsborough County Commissioners Stacey white and Ken Hagan had argued that the referendum should be placed on the November general election ballot rather than the primary, given the fact that there are a number of voters who are not allowed to vote in the closed primary.

The final vote in the school tax referendum resulted in a difference of less than .5% out of more than 221,000 votes that were cast. The vote was extremely close 111,076 to 110,486. This narrow margin triggered an automatic recount.

From USF public media: Recount confirms defeat of referendum that would have increased property taxes for Hillsborough Schools.

Hillsborough County school Superintendent Addison Davis was quick to hold a news conference and began preaching the gloom and doom resulting from the failure of the tax referendum to pass.

While it may very well be true that there were a number of technical reasons why the Hillsborough County school board taxing referendum failed, it would also be both politically and practically unwise not to take note of the closeness of the voting.

While Hillsborough County Superintendent Davis tries to figure out how he can squeeze more children into each classroom, he should also be taking a look at the administrative side of his educational system and figuring out how to do some serious cost cutting especially at the staffing level.

One thing you can take away from this vote, is the fact that voters are starting to take a more critical look at how these school systems are run and playing on emotion for votes may not be the best political approach when this goes back on the ballot.