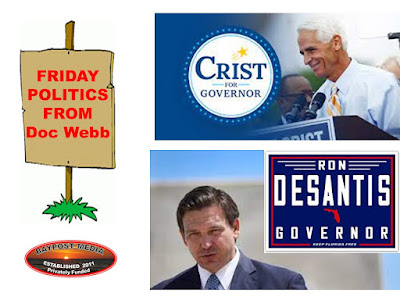 Now that the midterms are behind us, it is time to look at what Floridians will be dealing with as they consider their ballots for the midterm elections. Let us start from the top of the ballot with the race for Florida's governor.

When it comes to Ron DeSantis and Charlie Crist, there could hardly be a clearer contrast between two political candidates.

DeSantis, very Trump like, has proven his willingness to use the power and authority granted to him as governor of Florida to move things in his way. Not necessarily in the way of the majority of Floridians think.

If you think back to your grade school, middle school, and even high school days, you will probably remember at least one, if not several, bullies that you had to deal with.

Now look inside the Ron DeSantis press package. What you see is what you get. Somebody who enjoys power and likes to bully his way through the issues.

There is another thing to consider if you're planning to vote for Ron DeSantis.

When you cast your vote for DeSantis this November, you may very well be really voting for Jeanette Nunez for governor. Nunez, a former member of the Florida House of Representatives, was Ron Desantis's running mate for Lieutenant governor in the 2018 Florida gubernatorial election.

Nunez has been the quintessential Lieutenant Governor for Ron DeSantis. Her tenure can pretty much be summarized in the statement, “out of sight out of mind.” Just exactly what the Florida Governor likes. No competition for the spotlight.

At the very best if DeSantis is reelected, he will be a part-time governor spending most of his working hours campaigning for the Republican nomination.

Should DeSantis inadvertently succeed in his Presidential bid, Florida’s new governor would be Jeanette Nunez.

Think about that when you vote.

The other contender in the race is Saint Petersburg based Charlie Crist. In the interest of full disclosure, I have known Charlie Crist for years and supported him in almost every election he's participated in over the years.

The contrast between the two candidates is striking to say the least. Crist is as far from being a bully and a power-hungry politician as the East is from the West.

Charlie Crist is the real deal what you see is what you get. I've been following politics in Florida for over a decade, and I can honestly say I've never seen anybody walk the talk more closely than Charlie Crist.

He will come to the statehouse with a new view, and Florida needs a new view.

Florida needs some time to cool off politically. To get beyond the wild rhetoric of the Trump era. The Florida State government needs to begin once again to function like a government and not the arm of a radical political party.

You are hearing a lot of talk right now in the media about the cast of candidates at the Republicans are putting up following the midterms and how unqualified the media thinks they are.

That's not an issue with Charlie Crist. I encourage you to watch any debates that take place between Crist and DeSantis, pay careful attention to the political ads, their tenor and the effort to denigrate and demean the opposition. My hope is you won't see much of that from the Chris campaign, although some defense against the DeSantis onslaught will be necessary, all of that hate rhetoric is not who Charlie Crist is.

Charlie Crist will come to the governor's office with plenty of experience both political and practical when it comes to governing the state of Florida. He will turn down the pressure; he will not be meddling in every local government from the school board to the County Sheriff, and he will be moving to do what is best in this state for all Floridians.

The governor's race here is an important one not just for political reasons but for the practical governing of one of this country's largest states.