The Greatest Commercialization in Racing -The Indy 500 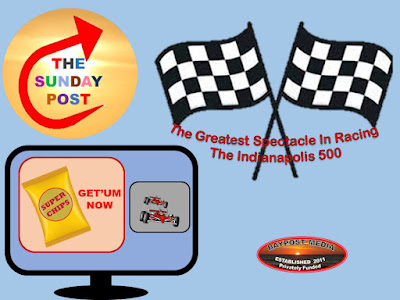 This past Sunday, I watched the Indianapolis 500-mile race.

I was born in Indiana, Wabash Indiana to be exact.

I went to my first Indianapolis 500-mile race with my grandfather and my father somewhere around 1948 or 1949; it was already a family tradition at that point.

In the following years as I was growing up, the trip to Indianapolis and the 500-mile race was a regular occurrence in my life. I still have the die cast Indianapolis racer that my grandfather bought me sometime in the early 1950s and a companion one, almost identical, that I bought in the 1990s. So, you can see I'm a great fan of the Indianapolis 500.

There's just nothing comparable to hanging out with 350,000 of your closest friends at an Indianapolis 500.

I have always watched the race on television when I could not attend, and it was televised, even that’s a family tradition.

This year was no exception.

NBC had the contract for this year’s Indianapolis 500-mile race, and the critiques have been rolling in.

I must agree I have never seen so many commercials crammed into the race as NBC managed to do in this year's event.

Placating the viewer with a split screen which showed “continuing action” every six minutes or so the network would slam in 4 minutes of commercials.

It got to be so predictable that every six minutes, or so I would just push last channel on my remote and watch something else for four minutes on another network.

It also seemed to me, but it's probably not true, that the live-action window got gradually smaller and the commercial window on the split screen got bigger as the race wore on. Probably not true but it seemed that way.

One fan wrote on Facebook, “I hope this Indy 500 race is not interrupting the commercials too much.”

It seems to me if the NBC television network is going to take on an institution like the Indianapolis 500-mile race, they at least ought to respect that institution for what it is. And respect those who want to watch it on television.

It appears that the people who are currently running NBC Sports are really not that motor sports infatuated. They see The Greatest Spectacle in Racing as the greatest opportunity to cram commercials down a large audience’s throat.

I didn't appreciate it much and if social media is any indicator neither did the people who traditionally tune in every year to watch the Greatest Spectacle in Racing.

For what it's worth, I did not watch most of the commercials that NBC so deftly crammed in between short bursts of action from the Motor Speedway.

I don't remember a single product, company, institution or promotion that the network ran during the race and therefore, all of that commercial money that those people spent was lost, at least on me.