The Florida State Guard or The DeSantis Private Army? 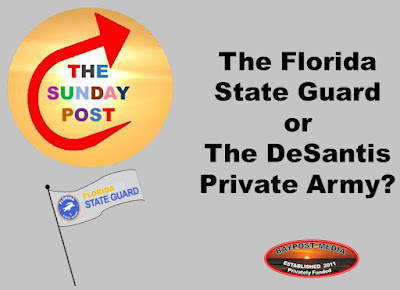 The implication is that this so-called private army would somehow infringe upon the rights of Florida's citizens.

For a detailed explanation of state Guards and specifically the one proposed in Florida check out this post.

As indicated in the article, state defense forces are authorized by Congress under 32 U.S.C. § 109

There hasn't been much clarification other than some generalizations from the Governor and the Governor's office regarding how this new state Guard will be deployed, and it is wise to at least watch for any Charter that is created as a controlling document for the Florida State Guard.

There is no doubt that this move by Governor DeSantis has pushed the buttons of the liberal left both Republican and Democrat camps.

You have to give the Governor a great deal of credit for being able to put his opposition in a clear panic and using state funds to do so.

Don't be too surprised if in the very near future you see some parallels being developed between the January 6th insurrection in Washington asking the question what if President Trump had been in control of an actual standing series of state militias and state guards participating in the events of January 6th?

It's a good question.

For now, the real focus of Floridians regardless of their politics should be the conditions and requirements under which people are allowed to serve in the Florida Guard.

You can be assured there will be plenty of volunteers from the far right of both political disciplines and a careful vetting process will need to be put in place to ensure that extremists don't end up in operational control of any unit of the Florida State Guard that is ultimately deployed.

Governor DeSantis’ own military background and his tendency towards some irrational decisions are sufficient enough to raise some concerns about the establishment of any paramilitary organization under the Governor's control.

There is no doubt, that the Florida Guard will become an issue in both the primary and the general gubernatorial election here in Florida and if nothing else, it will make a hot button talking point for the entire governor’s race.

Implemented by a Governor, who is a former Navy Seal and led by a retired Marine Lieutenant Colonel, the whole thing seems to scream a little bit more than hurricane support.

The proposed logo also seems to have a little bit more than crowd control in mind.