School Board Elections In Florida It's Almost Time To Vote For Your New School Board Members. 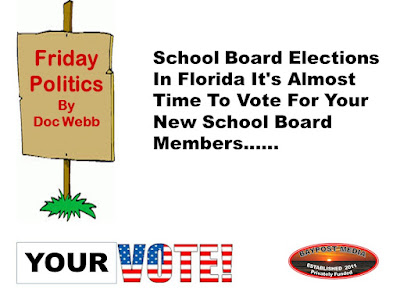 I've written a lot about school boards over the last few years. They are I believe, Florida’s most dysfunctional election body. Check out my past Post: Florida’s Most Dysfunctional Elected Body.

People running for School Boards almost universally nationwide are running on a single issue. Often, they're a frustrated teacher wanting to change the system, sometimes a parent with a religious, ethnic, or political axe to grind, and in most cases, they are not particularly knowledgeable about the inner workings of a school board under a Florida charter. You rarely see a school board candidate running on a policy of fiscal conservatism, proper management or organizational structure related to the school board. Let's face it; those issues don't usually get a lot of votes.

For some insight, you can check out these posts:

School Boards and Your Property Taxes…

In some counties in Florida, we have nonpartisan supposedly, school boards, in all reality the candidates fall along the traditional Democratic and Republican political lines and party positions.

As you begin to look at the candidates in your community running for School Board, here are some items you might want to consider as your planning your vote for School Board.

What are the candidates driving political or educational positions?

Does the candidate have a particular axe to grind such as textbooks, don't say gay, critical race theory or other hot point political issues they're trying to get elected on?

Does the candidate have any background indicating business or management experience?

On a sliding scale, is the candidate espousing liberal or highly conservative positions?

Does the candidate have any professional background or experience other than education?

Does the candidate seem to espouse the position that more property tax revenues should be given to the School Board with no indication of how that money should be expanded?

You're going to see a lot of pressure to approve property tax referendums for education and school boards in the upcoming election cycle.

As educational services and the delivery of education to students has changed over the last decade, school boards have been slow to evolve into new management structures and to accept, implement, and take advantage of the economies of scale offered by new educational techniques.

As we get to the general election, these referendums for increasing property taxes to benefit the public school system are going to be widely hyped by the school systems and the school districts.

Think carefully before you decide to tax yourself more for a school system that continues to deliver subpar results, is losing students to charter schools on a significant basis and becomes more politicized with each election cycle.