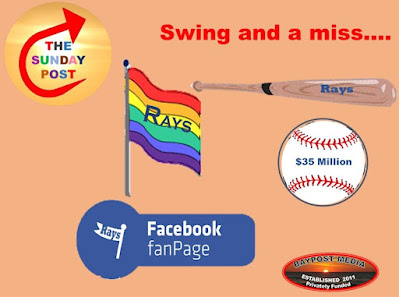 Governor Ron DeSantis chopped $35 million from the state budget which was to be sent to the Tampa Bay Rays where the construction of a new spring training site.

You can read the details in a CNN article By Steve Contorno: DeSantis blocks state money for Tampa Bay Rays training facility after team tweets against gun violence.

I have never been in favor of large investments by cities, counties, or the state of Florida in professional sports team venues.

The payback is never there, and the owners of these sports franchises almost universally continue to come to the government trough for additional money for a host of issues.

DeSantis is quoted in the Wall Street Journal editorial as saying, “I don't support giving taxpayer dollars to professional sports stadiums.” That should work well on a campaign sign.

The Rays didn't ingratiate themselves all that much with their recent stand on the LGBTQ uniform badge issue, and on their social media page positions on gun violence. All of which are hot buttons with the governor.

As the pendulum gradually moves away from the municipal financing of large sports arenas, the Rays may find themselves in a growing difficult situation regarding their upcoming relocation not only in Tampa Bay but in Florida in general.

The time is running out for the Tampa Bay Rays and their new stadium proposals. Their current existing contract/lease expires in 2027, and I'm not sure how much support there would be, at least at this point, in extending that agreement.

As Disney found out, and now the Tampa Bay Rays have discovered, entertainment venues poking around in political issues in Florida is dangerous ground to tread on.