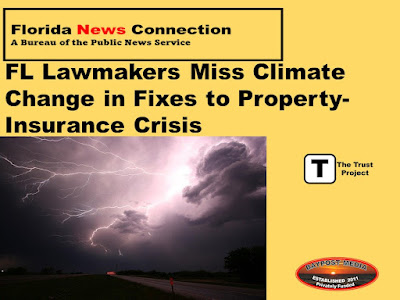 Florida lawmakers have signed off on quick fixes to the state's property insurance crisis - but critics say the plan pays little attention to the growing threat of climate change.

But Charles Nyce, associate director with the Center for Risk Management Education and Research at Florida State University, said fraud is only part of the problem. There are hurricanes, and the uncertainties around even more dangerous storms due to the warming climate.

Nyce warned that as more severe storms are reflected in catastrophe models, insurance companies will adjust to avoid potential losses - as they do for sea-level rise, wildfires and other natural disasters.

The package of bills from the special session, which had bipartisan support, has been described as "a meaningful first step."

Nyce said other options would be to tell people they can't live on the beach, or find ways to stop the water from coming in. He said given the reluctance to restrict homes in certain areas, he was pleased to see lawmakers offering up to $10,000 grants to make homes less vulnerable to storms.

And he said he'd be in favor of social programs for people who'd be disproportionately affected by climate change.

"Let insurance companies charge what is the actuarially fair rate for the risk that's posed," said Nyce. "And if that is unaffordable to some people, then you create a social program that addresses insurance affordability."

According to the Office of Insurance Regulation, Florida accounts for 9% of the nation's homeowners-insurance claims, and 79% of the lawsuits over claims filed.

Catastrophic losses like Hurricane Andrew have driven many large national insurers out of the state, leaving Floridians with fewer coverage options.