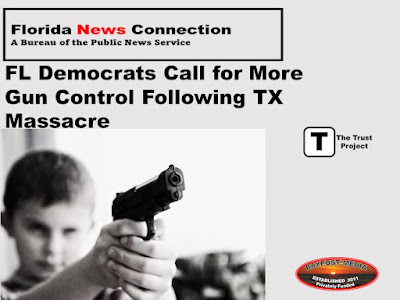 Democrats in the Florida Legislature are reviving calls for stricter gun-control laws, following the school shooting in Uvalde, Texas.

Florida's attempt at stopping school shootings came in 2018, when a gunman took 17 lives at Marjory Stoneman Douglas High School in Parkland. Driven by student protests, lawmakers passed measures allowing school professionals to volunteer as armed personnel, ban "bump stocks" and create a "red flag" law allowing police to confiscate guns from people deemed to be a threat to themselves or others.

Rep. Fentrice Driskell, D-Tampa, the House Democratic Leader, noted dozens of other ideas are being blocked by GOP lawmakers, even with public support.

"I'm talking about bills like universal background checks, safe storage laws, ID check on ammunition purchases, expanded mental-health programs," Driskell outlined. "We could do all of these things and not touch a single legally-owned firearm by a responsible gun owner."

Meanwhile, Gov. Ron DeSantis recently pledged his support for a change in state law to allow residents to carry concealed guns without getting permits.

Florida Republican legislative leaders did acknowledge the shooting in Texas by offering prayers and a moment of silence.

Rep. Chris Sprowls, R-Palm Harbor, Speaker of the House, spoke about the shootings.

"Our hearts are with these communities as they continue to suffer, we know all too well what it looks like for a community to be suffering the way that they are suffering."

After the Parkland shootings, lawmakers also set aside around $97 million in recurring funding for school resource officers and created the Office of Safe Schools in the Department of Education.

However, Democrats believe there is an ongoing need for stricter gun-control laws. They cite the amount of times Florida's "red flag" gun-confiscation law has been used. According to The Associated Press, it was used more than 3,500 times as early as 2020, a number Democrats claim has since increased to near 6,000.