Ms. Magazine Relaunches 1972 'We Have Had Abortions' Petition 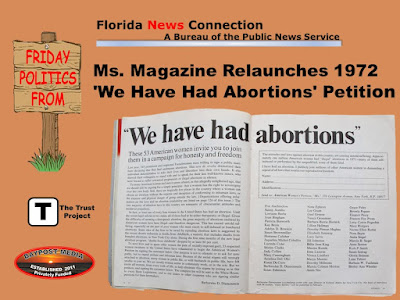 The leaked draft opinion signaling the Supreme Court's majority decision to overturn Roe v. Wade has sent shock waves across the U.S. When a final decision is issued before the end of the Supreme Court's term (likely in June), it will represent the biggest blow to women's constitutional rights in history.

In 1972, when abortion was still illegal throughout most of the country, 53 well-known U.S. women courageously declared "We Have Had Abortions" in the pages of the preview issue of Ms. magazine.

The Washington Post credited the petition with the "start of a powerful strategy in the U.S. abortion rights movement: ending the secrecy that had kept many women out of the fight." Executive editor Kathy Spillar told the Washington Post in a recent interview, "It made it acceptable to speak about it."

The next year, the U.S. Supreme Court ruled that abortion was a fundamental right protected by the U.S. Constitution. This year, the Supreme Court appears poised to reverse this position. In this perilous time, Ms. is relaunching the petition-with the encouragement and support of some of the original 1972 signers. This year alone, the petition has garnered almost 7,000 signatories.

Below is an excerpt from recent Washington Post coverage of the 1972 petition, as well as the 2022 relaunch. It shows the power of activism and journalism, and how they can shape a movement.

'We have had abortions': 1972 petition changed abortion rights movement

The first Ms. petition marked the start of a powerful strategy in the U.S. abortion rights movement: ending the secrecy that had kept many women out of the fight.

The effort has been replicated in recent years for the digital age, including the #ShoutYour Abortion Twitter challenge. Congresswomen have shared their own abortion stories on the House floor.

But that first Ms. petition circulated when abortion was illegal in most of the country.

Included in the Ms. issue were coupons for readers to fill out and mail in to add their names to the petition. Hundreds of the coupons poured in. Later that year, in its September issue, Ms. ran the petition again, this time with about 1,425 signatures.

"It liberated and mobilized an army of women who had been keeping a secret," said [Suzanne Braun Levine], who joined Ms. as editor soon after the petition ran.

This story was produced by Ms. Magazine.