Gun Violence in Florida Too Much Media Coverage? 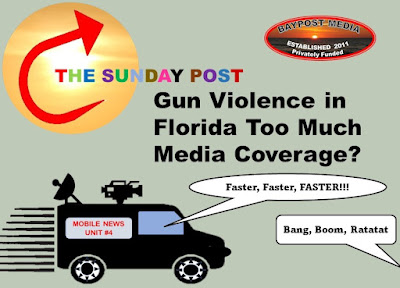 There is a lot of hand wringing going on in Florida regarding the amount of gun violence since the beginning of 2022. Here is an interesting Internet site giving gun violence statistics by state: World Population Review.

It goes without saying that almost everyone in the State: from politicians, to the clergy, to the education system has good reason to be concerned about the growing gun violence in Florida.

The traditionalists are all out blaming guns for the gun violence, and it certainly takes a gun for a shooting to occur. It also takes somebody who's willing or motivated to use it.

What I have noticed is that the only people trying to get to the report of a shooting, or some gun violence incident faster than the first responders are all the local television news people and their camera crews.

Gun violence, no matter what the type, from mass shootings to individual shootings and suicides are almost always the lead item on the local and in many cases the national newscasts.

While the usual calls for more gun controls and tighter gun restrictions are going out in times like these, I wonder if the news media isn't one of the major contributors to the actual encouragement of gun violence events.

It's the old 15 minutes of fame motivation.

Maybe it's time for the local television news to reel in their camera crews and not be the first ones to get to the shooting scene; hop on the air live in hopes of showing live action going on in breaking news.

Nothing encourages a copycat more than knowing, regardless of the outcome, whether they live or die, they will have their 15 minutes and in this case is often many, many more minutes of fame thanks to local and regional news reporting.

Don't get me wrong, I'm not saying that these events shouldn't be made known to the public, but the nature of the reporting, the level of detail given, only encourages people to look to guns as a solution to their problems or an outlet for their frustrations.

We've been through this before when the news media gets obsessed with a certain type of news event. The competition in the news business is fierce. Everyone wants to be there to get the first live pictures and the first interviews.

Local and regional electronic media news editors need to think twice before launching their camera crews and helicopters dashing across the city or the county to the latest site of a shooting, so they can splash it across the screen on their five o'clock, six o'clock, seven o'clock, 10:00 o'clock, and 11:00 o'clock news reports and lead the morning news with the same story.

Maybe you've noticed when the shooting dies down, the news media continues to rerun stories of past shootings.

Not only do I not think it's good journalism, but I also don’t think it's really serving the public interest.