Through The Eyes of a Donkey 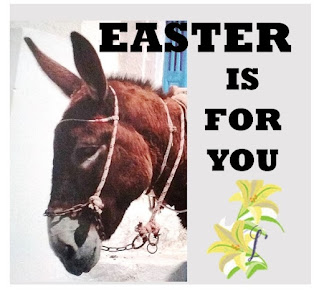 His eyes met mine, and I knew that this was no mortal human.

The day started normally the keeper of the flock singled out a few goats and a couple of us donkeys to take to the market place in a small village just outside of Jerusalem.

I had made this trip before. I was often put up for sale, but I have never been ridden, and a little hostile action sent most would-be buyers looking elsewhere for a donkey.

The trip from the fields to the village was uneventful, but there did seem to more people than normal on the road, and they were carrying palm fronds and seemed very excited, all very upsetting to me.

Once at the market things went pretty much as usual, a lot of lookers but no one seemed particularly interested in buying me.

As the day wore on, activity in the market dropped off as people headed back to the road to see a new King that was coming to Jerusalem.

My owners packed up and lead me to a small inn where I was tied to a hitch rack outside while they had something to eat and drink.

Suddenly, two men arrived and began to untie my line. The owners shouted, "Hey what are you doing with our donkey?" The men replied, "The Master has need of your donkey." The owners bowed as the men unhitched my line. I felt no need to buck or pull away; there was a strange feeling in my soul to go where I was needed.

In a short time, we arrived at a throng of people, in their midst a man like no man I had ever seen. His eyes met mine, and I knew that this was no mortal human.

As they threw their cloaks on my back, at first I shivered and wanted to throw them off, but then the man, this King, was at my side and laid his hand on me. All fear left me.

As they sat him on my back warmth filled my being, and we headed toward the great City.

The trip was not long the cloaks and palm fronds made stepping a bit treacherous, but there was always the steady hand guiding me to the final destination.

The crowd was cheering, as the man climbed off my back. Our eyes once again met. This time he looked sad and deeply concerned. His eyes moved to the City for a moment then, for some reason, back to mine.

There was a loving smile, I could only close my eyes in response, and when I opened them, he was gone.

The two who had found me returned me to the village where surprisingly my owners still waited.

We returned to the fields, but I was never again taken to the market for sale.

Sometimes in the cool of the evening, my owners would come to my place in the field and sit and tell stories to their children about the day the King rode me to Jerusalem.

The children would pet me gently, and the warmth of that day would once again fill my body.

Worship with your family this Easter Sunday.
May the blessing of Easter be yours.