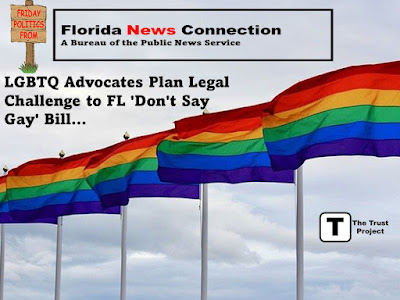 Critics accuse DeSantis, a likely 2024 Republican presidential candidate, of playing politics at the expense of vulnerable LGBTQ youths. During Monday's bill-signing news conference, DeSantis said teaching kindergarten-aged kids "they can be whatever they want to be" was "inappropriate" for children.

Rep. Michele Rayner, D-St. Petersburg, who is openly gay, said during a counter news conference by Equality Florida she's wondering about the children.

Equality Florida, which advocates for the LGBTQ community, announced "swift and fierce" litigation to fight against the bill. They are creating a legal-defense fund to support LGBTQ youths and their families who feel the bill violates their rights.

Joe Saunders, senior political director for Equality Florida, said the legal defense fund is necessary after seeing children be bullied for speaking up and against the bill. He warned the law already has caused significant damage.

DeSantis and some other Republicans said the measure is reasonable and parents, not teachers, should be managing subjects about sexual orientation and gender identity.

Andrew Spar, president of the Florida Education Association, said the bill is based on a falsehood, denying claims kids are being taught inappropriate topics. The move comes as even the Walt Disney Company, an influential player in Florida politics, continues to face backlash for its slow response to speak against the bill which is now law.