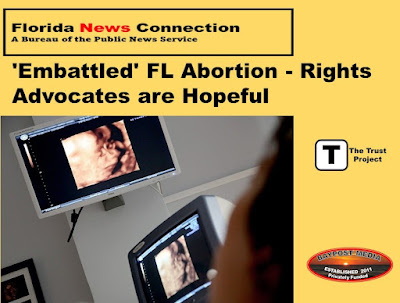 Gov. Ron DeSantis signed a 15-week abortion ban into law, a major blow to overall abortion access in Southern states where Florida has been a beacon.

The governor's action comes just days after a Florida judge tossed out a challenge to another law calling for a 24-hour waiting period for an abortion after consulting with a doctor.

Amy Weintraub, reproductive rights program director for Progress Florida, said although the governor's signature was expected, it was a shock to the system for those entrenched in the reproductive-rights movement.

"We are feeling especially -- what's the word -- 'embattled' currently," Weintraub remarked. "And of course, we are also bracing ourselves with what the United States Supreme Court is going to decide."

DeSantis said the law will defend those who cannot defend themselves.

Republicans across the nation have added new abortion restrictions since the U.S. Supreme Court signaled it would uphold Mississippi's law banning abortions after 15 weeks. The court could weaken or overturn the 1973 Roe v. Wade decision guaranteeing a pregnant person's right to choose an abortion.

Weintraub noted she is heartened by the number of companies including, Apple, Citi and Yelp stepping up to show abortion care is a workplace issue. They are providing travel support to people who are stuck in states with restrictions beyond Florida's 15-week ban, like Texas.

"Many of the problems that pregnant people experience with their pregnancies cannot be anticipated before this restriction is looming over their heads," Weintraub explained. "These employers recognize that, and they are promising their employees that they will be able to get the health care they need, and I think that's freaking fantastic."

Florida's new law, which goes into effect July 1, does not allow for exemptions for pregnancies from rape, incest or human trafficking. It does exempt if the abortion is necessary to save a mother's life, prevent serious injury or if the fetus has a fatal abnormality.