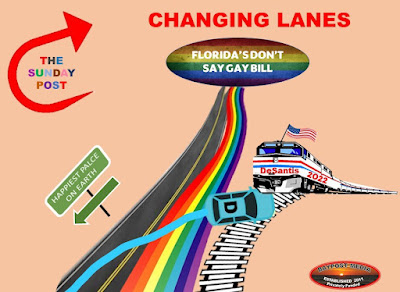 First no comment, then, supposedly forced into the issue by their LGBTQ employees, Disney bungled it once again, and finally coming out against the Bill.

If you want some information regarding independent special districts and the Reedy Creek district which Disney controls, you can check out these links.

From CNN By Eric Levenson and Dianne Gallagher: Why Disney has its own government in Florida and what happens if that goes away.

The Reedy Creek district consists of about 25,000 acres in Orange and Osceola counties in Florida. It includes four theme parks, two water parks, one Sports Complex, 175 miles of roadway, 67 miles of waterway and the cities of Bay Lake, and Lake Bell Vista.

You can check out the Reedy Creek website by clicking here.

I'm not sure about what kind of roller coaster ride the Disney people thought they were embarking on with their approach to the governor's proposed bill and the not too surprising results in the legislature.

One thing is for certain; this whole debacle has turned into a major train wreck for the Disney people.

Like most people and organizations that have decided to take on Florida’s governor, Ron DeSantis, DeSantis is not easily scared and Disney's sheer size and presence in Florida certainly didn't intimidate the governor.

What is turning out to be a public relations nightmare for Disney, is in many ways a political campaign plus for the governor and his reelection effort.

And if you think for one moment that this isn't a political battle, note the political comments coming out of the two counties that are part of the Reedy Creek district, Orange County and Osceola County.

These local politicians are crying the sky is falling, and property taxes will escalate while failing to recognize or report the massive amount of property tax revenue that will come into these counties as the special taxing district is dissolved.

Why would they do that?

The answer is simple.

The local-area politicians in these two counties don't want to get on Disney's bad side and risk losing Disney's political campaign support in upcoming elections.

Going forward, Disney's dollars are only going to go to people who support Disney's position of retaining the Reedy Creek taxing district.

I wonder which gubernatorial candidate will put on the mouse ears and pick up Disney’s cause?