DeSantis Would Cut Florida's Black Representation in Half 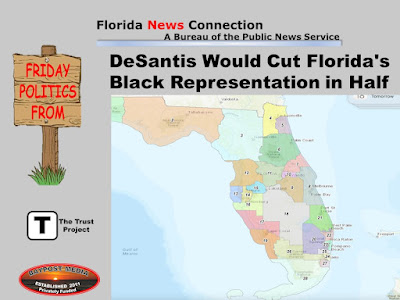 Florida's redistricting saga continues Tuesday when lawmakers return to Tallahassee for a special session to essentially give Gov. Ron DeSantis what he wants.

Legislators passed their own version of Florida's proposed new congressional maps, but the governor vetoed them in favor of his own, which favor more Republicans and dismantle districts ensuring representation for Black voters.

Ellen Freidin, CEO and general counsel of Fair Districts Now, led the campaign in 2010 to pass a constitutional amendment to prevent politicians from doing exactly what the governor is doing.

"He's really totally disregarding all the voters of Florida and in particular Black voters in the two districts," Freidin asserted. "He's cutting black representation in Florida in half."

Even though the state Constitution puts lawmakers in charge of redistricting, the GOP-controlled Legislature agreed to back away from challenging DeSantis, despite calls from Democrats to do so.

Freidin thinks the governor's goal is to get rid of the Fair Districts Amendment, which prevents politicians from drawing districts for their own advantage and ensure fair, minority representation.

"It's totally unprecedented for a governor to bulldoze his way into redistricting," Freidin contended. "And again, he's doing it for his own political ambitions."

Legal challenges are expected. The once-a-decade process of redrawing maps will affect Floridians' ability to have their voices represented in Congress, at least until the next redistricting process.