Disney To Gay or Not to Gay - Is that Really the Question? 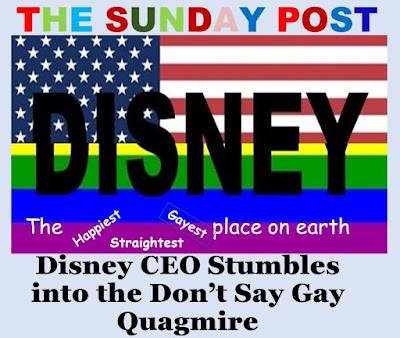 Disney rarely produces a flop but this past week, or so they're entanglement with the Florida don't say gay bill has resulted in both a real and a very political catastrophe.

Essentially a crisis of their own ineptitude and making, Disney's management just couldn't seem to get their feet on the ground in a comfortable position regarding this latest effort of the Florida legislature to manage public school education.

Disney is not only a major employer in Florida, but in many ways and to many people, they are the face of the State. The moniker “happiest place on earth” is often taken seriously by those who visit the theme park.

Here is a simple rundown:

Then the Florida Legislature passed the measure and as the outcry from both the public and the Disney employee base grew to a near frenzy, the Disney CEO switched lanes and now, he and Disney were opposed to the don't say gay bill.

If you're confused, you're not alone.

Then there was Walt Disney's grandniece, Abigail Disney, claiming that Chapek was, more worried about right wing backlash” than Disney staff and fans. Ouch, that must have hurt.

Notwithstanding that don't say gay bill, which will get to in just a few lines, there was more than enough stupidity going around at the top brass level in the Disney organization.

If Chapek or any of his advisors have been paying any attention to Governor Ron DeSantis, they should have realized that taking on the don't say gay bill in any form or fashion was just the bat DeSantis would be looking for to beat Disney over the head with. Since the mouse house had given money to both sides of the issue, one could say they were essentially neutral just trying to make sure everything had a fair hearing.

Instead, once they started flip flopping around, the Florida Governor seized the opportunity and in clearly, cartoon fashion whacked them over the head with the bat.

As to the bill itself, for the short term, you can pretty well rest assured that there is already a filing in preparation, if not already filed, by the time you read this challenging the legality of the law. And, if they search around just a little, I'm sure they can find a left-leaning  judge that will at best throw it or at least issue a temporary stay.

Long term if nobody gives up on this thing, it will end up in the Supreme Court.

For now, those teaching grades K through 3 in the public school system are still free to promote gayness if they so choose.

However, if the statutory provisions of the law that allows parents to sue remain in place and there is no statute of limitations, School Boards may want to take a careful approach to what's going on in their K through 3 classrooms.

And that is sure to open up whole new can of worms.