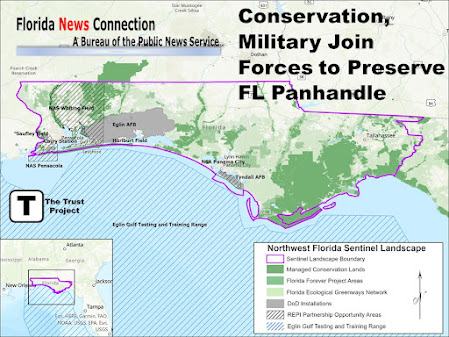 A new project in the Florida panhandle is ensuring military readiness while conserving one of the most biodiverse regions in the country.

Federal agencies have designated 7.7 million acres from Tallahassee to the Alabama border as a Sentinel Landscape. The area encompasses multiple military bases, including Eglin Air Force Base and a hub for training operations in the Gulf of Mexico.

Wimmer pointed out the Northwest Florida Sentinel Landscape provides an important opportunity to conserve the panhandle rather than clear the way for more development.

Wimmer emphasized the project also will build more resilience against the impacts of a changing climate, such as flooding. The region already is experiencing more extreme weather. Tyndall Air Force Base received a direct hit from Hurricane Michael in 2018, resulting in a rebuilding price tag which could reach $5 billion.

In addition, Wimmer noted the panhandle is home to the highest species diversity of reptiles and amphibians north of Mexico.

"We're also looking for opportunities where we can protect some of the last remaining habitats for endangered species like the eastern indigo snake or flatwood salamanders or the Okaloosa darter or the gopher tortoise," Wimmer outlined.

Other Sentinel Landscape designations have been announced in Texas and Indiana. Next Wednesday, the Sentinel Landscapes Partnership, composed of the U.S. departments of Agriculture, Defense and Interior, will host a webinar on the new conservation projects.