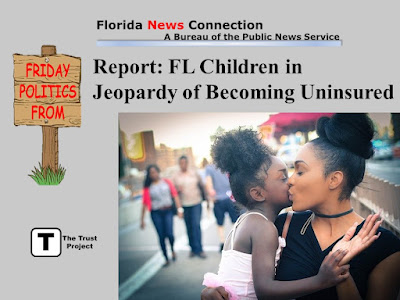 A new report found Florida kids in the Children's Health Insurance Program could be at most risk of losing health coverage when the official public-health emergency for COVID-19 expires.

Researchers at the Georgetown University Center for Children and Families warned millions of children could lose coverage as soon as April, when states will have to recheck eligibility for everyone enrolled in Medicaid, including kids.

Joan Alker, executive director of the Georgetown University Center for Children and Families and Research Professor at the McCourt School of Public Policy, said the decisions to make CHIP a separate program from Medicaid, and to require families to contribute to the cost, increase the challenges to keeping kids enrolled.

"For all of these reasons, we estimate today that 6.7 million children are at extremely high risk of becoming uninsured during this process," Alker reported. "As big as this number is, we actually believe this is a conservative estimate."

The report said 2.9 million children could re-enroll in public health programs if they lose coverage, but about 3.8 million would have to find other insurance coverage or become uninsured. While kids in all states are at risk of losing coverage, the report lists Florida as one of the states at highest risk, along with Georgia and Texas.

Alison Yager, executive director of the Florida Health Justice Project, said she hopes Florida's leaders will jump ahead of the looming problem to ease the transitions in Florida's CHIP program, known as Florida KidCare.

While Medicaid beneficiaries age five and older are required to have their eligibility checked twice a year,
children enrolled in Florida KidCare are checked for eligibility only once a year. Yager is concerned that many families will be shocked when the relative stability that came with the public-health emergency ends.

Yager suggested the state should boost the call-center staff for the insurance programs to be more responsive.

Tricia Brooks, research professor at the McCourt School of Public Policy, said there are many things states can do to avoid coverage gaps, including moving kids into programs they are eligible for, rather than dropping them altogether.

"States should also enhance processes to follow up with enrollees via multiple communication modes, when action is required to avoid a loss of coverage," Brooks urged.

About five million Floridians are enrolled in the state's Medicaid program, most with managed-care plans.