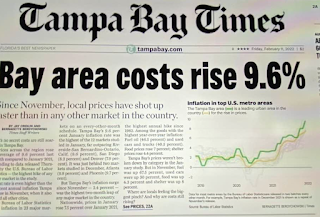 The Tampa Bay Times just reported the inflation tax in Tampa Bay is raging at 9.6%. Of course everyone knows the real inflation rate of food, household goods, gas, furniture, vehicles, etc. etc. is in the double digits.
Hillsborough County commissioner Harry Cohen doesn't care. He is one of the Tampa Centric 5 Democrat commissioners pushing to put another massive $18 BILLION rail tax boondoggle on the November ballot.

Harry Cohen is running for re-election in November. He wants to burden all Hillsborough County residents and businesses with higher taxes.

Voters should know more about Harry Cohen before November.

Cohen lives in Tampa and is a former Tampa city councilman. He ran unsuccessfully for Tampa Mayor in 2019 before running for his District 1 commission seat in 2020 to keep feeding his taxpayer fed trough.

In 2016 Cohen said Hillary Clinton's "level of competence" is her big selling point. Hillary called half the country deplorable's and irredeemables and launched the Russia Hoax. The Hillary campaign is now implicated in the Durham investigation for paying operatives to illegally spy on a Presidential campaign and a sitting President.

Cohen is a lawyer who supported the unlawful $16 BILLION All For Transportation (AFT) rail tax in 2018.

As a lawyer we expect Cohen to understand Florida laws and statutes. Yet he supported a massive illegal and unlawful AFT rail tax hike. Wealthy local cronies who would greatly benefit from the rail tax funded AFT. Connect the dots.

Cohen was not transparent during his 2020 campaign about his "cozy" relationship with AFT and the lawsuit.

Court documents from Commissioner Stacy White's AFT lawsuit reflect Cohen became legal counsel for AFT Defendant Clerk of the Court in July 2019. Cohen was hired by then Democrat Clerk of the Court Pat Frank, who he previously worked for from 2005 until 2011 when he was elected to his Tampa city council seat.

We could not find where Cohen disclosed to voters in 2020 he was legal counsel for one of the AFT lawsuit Defendants.

Subsequently, Court documents from 2021 reflect Cohen was removed as legal counsel for AFT Defendant Clerk of the Court on March 19, 2021. That was months AFTER he had won his election in November 2020.

Coincidentally, a month later on April 29, 2021, the AFT Defendants filed a court motion for "their" "funny business" refund recommendation. The AFT Defendants shady refund process was to allow the County to keep as much of the illegally collected AFT rail tax as possible.

Big red flag! Cohen is a lawyer who should know better. Imagine the bigger legal mess if any of the AFT unlawfully collected tax dollars had been spent.

When the commissioners were "handing out" over 25 MILLION of YOUR tax dollars left over from the FY2021 budget (aka flagged items) at the y. 7/29/2021 budget meeting, Cohen handed $2 MILLION to the Straz Center. Obviously funding local roads is not a priority. 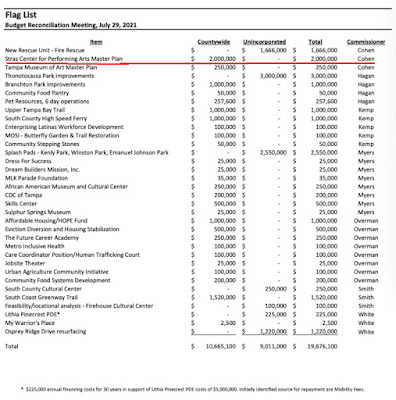 Cohen also was not transparent about his relationship with the Straz Center.

The Straz Center is OWNED by the City of Tampa. Harry Cohen is a member of the Straz Center Board of Trustees. Cohen handed county tax dollars to a Board he sits on. Any conflict of interest there?

In addition, Gary Sasso, President and CEO of Carlton Fields law firm, is Chair of the Straz Center Board of Trustees. Sasso spoke at the 7/29/2021 county commission budget meeting asking for more county tax dollars for the Straz Center.

Cronies can attend a commission meeting to ask for hand outs for the Straz Center and they get immediately rewarded by Cohen (who sits on their Board) with your tax dollars. When taxpaying citizens ask that their existing tax dollars be properly spent fixing our local roads - a primary responsibility of local government - Cohen ignores them.

And in 2010 Sasso was Chairman of the pro rail Moving Hillsborough Forward (MHF) PAC and its sidekick rail cartel leader the Tampa Bay Partnership. They supported the 2010 rail tax boondoggle that was thankfully overwhelmingly defeated.

In 2018 about a dozen Tampa Bay Partnership (membership by invitation only) crony associates funded the illegal AFT rail tax. Many of the AFT donors were the same ones who funded the 2010 rail tax. Expect the same from the same wealthy cronies when Cohen helps put the $18 BILLION AFT 2.0 on the November ballot.

Cohen is not only an ally of the rail cartel, he is also a member of the anti-car brigade.

In 2020 Cohen said “We must reduce congestion by getting single occupancy vehicles off the road." In 2019 Cohen clearly stated "I oppose widening 275".

Last year Cohen voted with the other Tampa Centric 5 Democrats on the Hillsborough County Transportation Planning Organization Board to stop the project to expand I-275 north of downtown. That project, within the existing property footprint FDOT currently owns, has been part of FDOT's plans for decades.

Par for the course since the 2018 AFT rail tax Cohen supported funded 450 miles of road diets to REMOVE vehicle lanes of traffic and prohibited funding the needed new road capacity in Hillsborough County for 30 long years.

Cohen's costly vision is to expand the bankrupted Tampa Streetcar and "modernize" it into a light rail system. He wants to buy the CSX tracks to add another accident prone street level fiscally failed SunRail SunFail boondoggle in Tampa. And Cohen wants to force taxpayers in unincorporated Hillsborough to pay for these rail systems.

Scott Levinson is running against Cohen again in November. It is doubtful many voters in 2020 knew Cohen's "cozy" relationship with AFT being legally connected to AFT's big legal mess. They will this election go round.

Raging inflation, economic uncertainty, those still struggling from the pandemic and the illegal AFT rail tax refund mess makes the 2022 election light years away from 2020.

Voters are restless and mad - especially at crony incumbents they feel are not looking out for their best interests.

Hillsborough County Center is a crony Swamp that needs draining.

Posted by Sharon Calvert at 2:14 PM