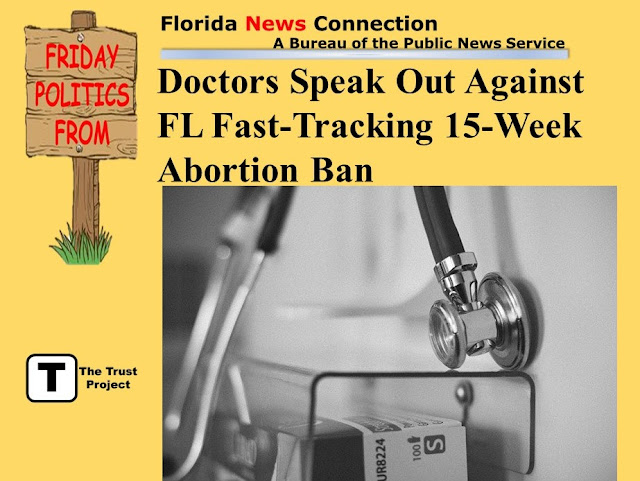 Republicans in the Florida Legislature are fast-tracking a 15-week abortion ban over the objections of activists and medical professionals.

The bill was approved on a party-line vote. It states a "physician may not perform a termination of pregnancy if the physician determines the gestational age of the fetus is more than 15 weeks."

Dr. Guy Benrubi, a Jacksonville-based obstetrician and gynecologist, said the rule is problematic for a number of reasons.

The ban includes an exception if the pregnant person's health is at risk, but there are no exceptions for rape or incest.

The legislature has a GOP majority and Republican Gov. Ron DeSantis has already signaled his support for the ban. The bill has one final committee stop this week before a House vote.

Dr. Benrubi predicted if the bill becomes law, it would have the most impact on the state's most vulnerable populations - including some who would have to drive up to 570 miles to the nearest clinic.

"Worst impact for women of color, for women who do not have a lot of resources, for rural women," said Benrubi, "because its difficult to get to providers. There are not that many providers in the state, and there are a lot of counties that have absolutely no providers."

The American College of Obstetricians and Gynecologists of Florida issued this statement: "Like all medical matters, decisions regarding reproductive medical care should be made between a patient and their health care provider - not lawmakers."

The bill's next hearing is Wednesday in the Health and Human Services Committee.

Support for this reporting was provided by the Carnegie Corporation of New York.